A nod to past and present 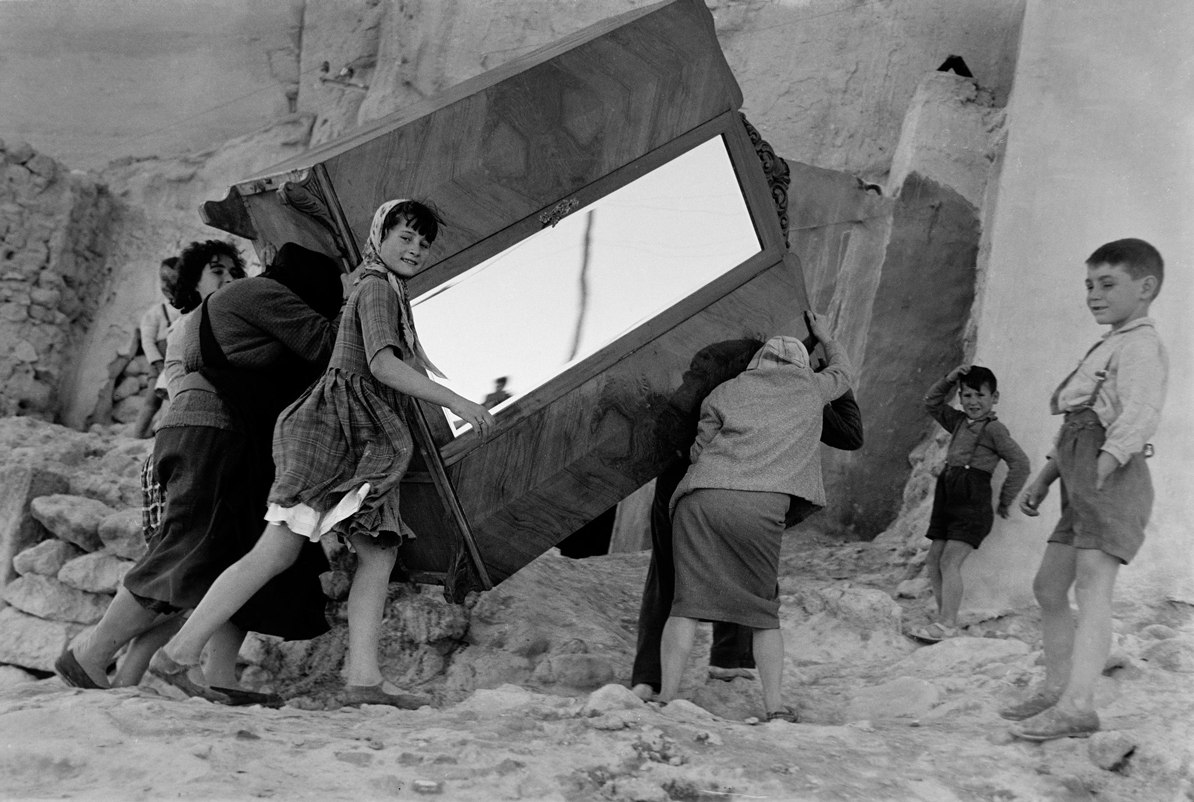 This image by Carlos Pérez-Siquier, s singularly enchanting, imbued with the assertive perspicacity of the eyes of this intuitive photographer at this precise, unique and unrepeatable moment in time, The photograph wins you over with its perfect composition and unusual narrative dynamic. The fluctuations of the many stories centered on female protagonists, among labyrinthine cobbled streets and houses like glazed meringues, pack a punch. A nod to the past and present highlights the flavor of analog photography in the black and white photo essays of that time (Life, VU, and Italian neorealist cinema). These were ‘times of silence’ in a post-war Spain laboring under a dictatorship, and the young photographer, camera in hand, seduced by the light, the landscape and the humility of the people of his native Almeria, used the shantytown of La Chanca as a location, aware that for his purposes the historic moment is just as fundamental as the precise moment. He gave the name of the neighborhood to the series he produced at a leisurely pace between 1956 and 1965 This image strikes me as the keystone of the series, in that it crowns its poetic sensibility. Eight eyes look out at you from the photograph, and the photographer acts as your eyes when framing the beautiful altarpiece, immortalizing the group procession laboring under the weight of the oak display cabinet, bodies bent over under the weight of the cross on their shoulders. Three grinning boys watch the procession, forming a compositional triangle, colored with punctums: cheeky faces of enjoyment, the gestures of their hands – one is scratching his head, another has his hand in his pocket – and all three are wearing braces. The only man in the scene heaves his shoulder against the altarpiece, steering its transit. The legs strain against the limestone. The oldest woman is wearing compression stockings, and a white petticoat peeps out below the skirt of the youngest girl, blowing against her thighs. The candid protagonist looks directly at the photographer, positioned right in the center in front of the mirror. It is a rare thing for two realities to run parallel to each other as in this case: what the camera captures and what the mirror reflects: the reality behind the photographer. Another nod. Its mercurial shine competes with the sunlight, mediated by the victorious teenage grin. The effort of the women affirms the modernity of the home, the enticing novelty of being able to see your full body reflected, and secrets unlocked. The clairvoyance of the photographer does not entail ‘looking’ but rather ‘finding’ himself there, according to Barthes. Thanks to dogged, intelligent choice he has been there for decades, patiently recording the everyday light of human sentiments.

Edda Armas is a writer; her twiter account defines her as a poet, social psychologist, reader and cloud-gazer.