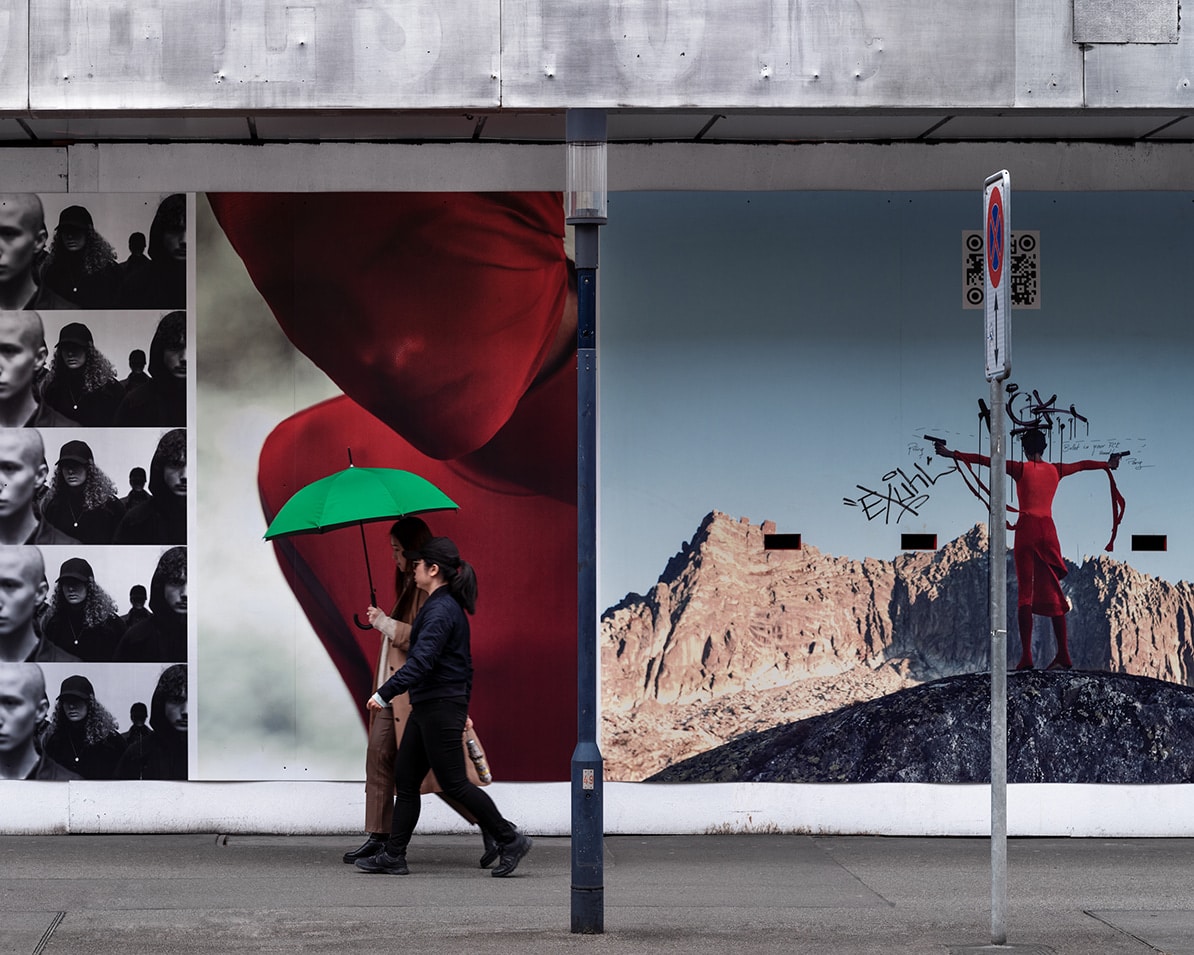 Opening times:
Until March 30:
Mondays (except holidays): Closed.
Tuesday to Sundays (and holidays): 11 am – 7 pm

*The evacuation of the hall starts 10 minutes before closing time. Last access (6:30 pm – 7:30 pm) only allows a 20 minutes tour to the exhibitions.

The Image Cities project by Russian-American photographer Anastasia Samoylova was the winning entry in the first edition of the biennial KBr Photo Award, launched by Fundación MAPFRE in 2021.

Image Cities is an exhaustive and conscientious work, produced in various locations, on how photography and images are integrated into the urban environment. Samoylova revamps the vision and language of documentary photography in a working process that she defines as artisanal: the photographs are superimposed on one another to create collages in which the human figure is almost always absent and, if it appears at all, it does so on a minimal scale compared to the grandeur of the buildings and advertisements. Her images express the ambivalence and contradictions of today’s urban landscape: while cities try to promote their individuality, their reality is moving towards a generic scenario in which the specific configuration of each city loses its uniqueness amidst anonymous steel and glass architecture.

Online tickets sale will be available from February 1st

The exhibition comprises 46 images that make up the bulk of Image cities, a corpus that acquires its meaning as a series since it is this seriality that makes the city, its individuality, disappear. The men and women who can be glimpsed in some of these cities stroll indifferently through their streets, almost always self-absorbed, in front of the large buildings, the banners and billboards dedicated to new luxury goods, fashionable perfumes or beauty products. Always in vivid colours and sharp outlines, with their play of reflections and compositions in successive planes, Samoylova’s images emphasise the monumentality of the buildings or skyscrapers over any other motif that appears in the image.

The last group of the exhibition is devoted to women in the city. The female figure is at the hub of consumer society, both object and subject of advertising campaigns that link existence to luxury and glamour, and which have little to do with the everyday problems and concerns of the vast majority of citizens.

We should not forget that Samoylova’s work resonates with echoes of the traditional documentary photography explored by figures such as Eugène Atget at the beginning of the 20th century, but also by women such as Berenice Abbot and Lisette Model. The play of reflections and mirrors, the cut compositions cannot but evoke the work of Lee Friedlander, one of the artists most revered by Samoylova and one of the photographers who renewed this tradition along with Diane Arbus and Garry Winogrand at the end of the 1960s.

KBr Photo Award: The award, promoted by Fundación MAPFRE, was launched in 2021 as an ambitious initiative that seeks to support and promote proposals from current photographers who are linked in some way to documentary photography. Since 2007, this tradition has been one of the main focuses of Fundación MAPFRE’s programme of photography exhibitions as well as its photographic collection, which houses works by Walker Evans, Lee Friedlander and Lissete Model, among others. Following in the wake of this tradition, the work of Anastasia Samoylova provides a renewed language and vision within this documentary practice, incorporating vibrant images of urban landscapes in an ambivalent and contradictory world that is currently experiencing a period marked by major crises, not only of an economic nature, but also climatic and even socio-cultural.

The non-city: In today’s age of neoliberal economies, interconnected financial markets and global images, international economic and cultural centres are becoming increasingly alike. However, cities like New York, Moscow and London attempt to emphasize their individuality, often giving new meaning to their specific history. Despite this desire, all these cities are moving towards a generic urban landscape of anonymous steel and glass architecture where homes, offices and stores are indistinguishable. Samoylova’s project  takes a close look at the role photography plays in creating this ideological gap between a presumed urban identity and their reality.

The collage: Since her early works, one of Samoylova’s main concerns has been the composition of her images, perfectly studied and with superimposed elements, key to obtaining the results she is looking for. These collages, generally created with royalty-free images taken from the internet, are printed, cut out, assembled, mounted, made three-dimensional and then returned to the two-dimensional once photographed, in a process that favours the manual and handmade.