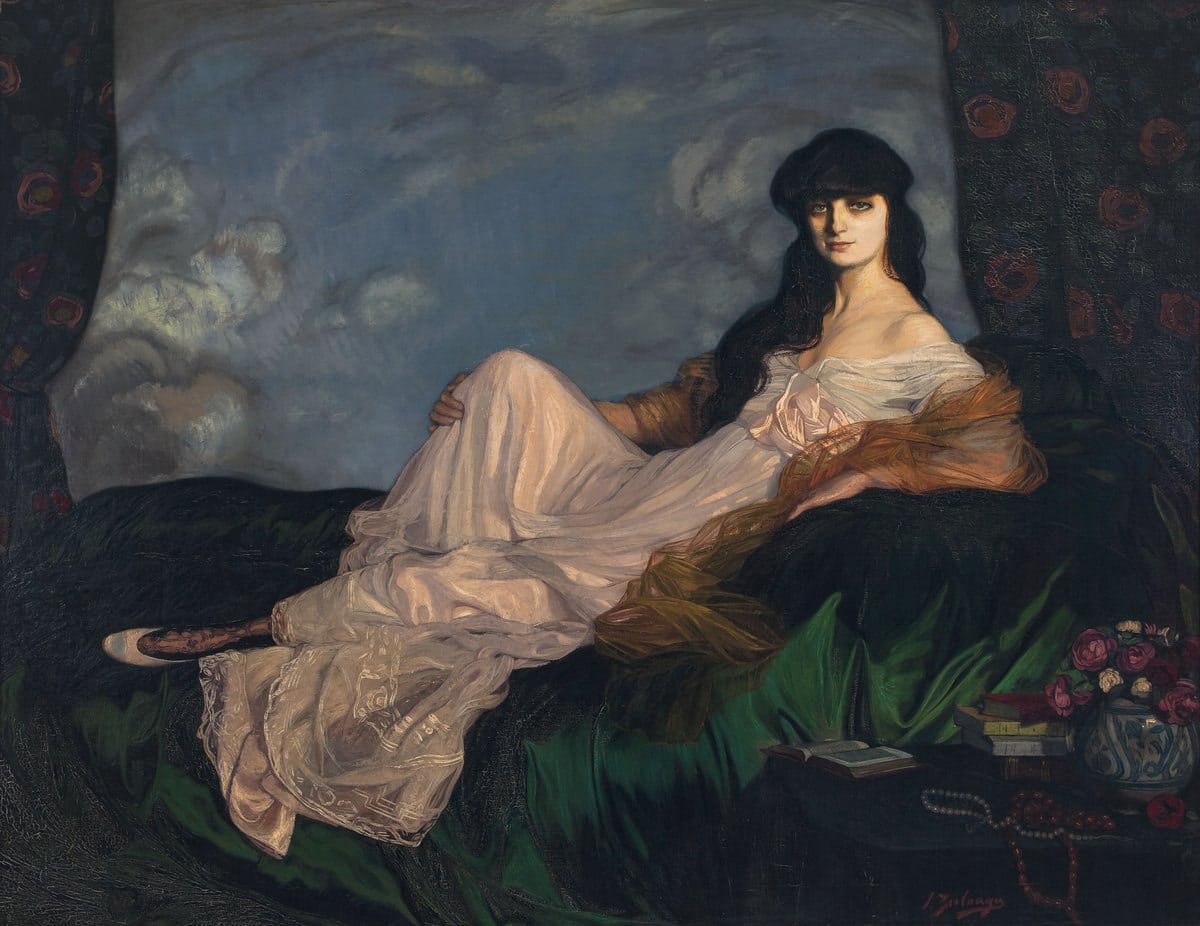 The exhibition Ignacio Zuloaga in Belle Époque Paris seeks to provide an impression of the work of this painter from Eibar not often seen in Spain. Without overlooking the hackneyed conventional interpretation that links him to ‘Black Spain’, the course of the exhibition goes beyond that concept and shows how the paintings of Zuloaga (Eibar, 1870-Madrid, 1945) combine a deep sense of tradition with a completely modern outlook, particularly linked to Paris of the Belle Epoque and to the symbolist circles that the painter moved in during those years.

To be able to talk about Zuloaga’s world view we need to place his work against other artists of the day such as Paul Gauguin, Paul Sérusier, Pablo Picasso, Francisco Durrio, Santiago Rusiñol, Maurice Denis, Émile Bernard, Giovanni Boldini, Jacques Émile Blanche and the sculptor Auguste Rodin, among others. The show, with more than 90 works, has relied on more than 40 lenders, between domestic and international private collections as well as the Zuloaga family itself, and institutions such as the Galleria Internazionale d’Arte Moderna di Ca’ Pesaro, Venice; Museum of Fine Arts, Boston; Musée d’Orsay, Paris; Musée National Picasso, Paris; Musée Rodin, París; Museo de Bellas Artes, Bilbao; National Gallery of Art, Washington D.C.; The State Hermitage Museum, Saint Petersburg and The State Pushkin Museum of Fine Arts, Moscow.

In 1889, at just 19 years of age, Ignacio Zuloaga arrived in Paris, at that time the world’s capital of modern art. The painter found himself in a cultural melting pot of a city, in which the most innovative trends came together and in where painters, sculptors and writers were experimenting with new artistic languages that would lead towards modernity.

He activity participated in this ‘fin de siècle’ Paris. No sooner did he arrive than he was in contact with Paul Gauguin, Henri de Toulouse-Lautrec, Edgar Degas and Jacques-Émile Blanche and he showed his work in the leading Parisian salons and galleries. At the same time, his work reflected some of the artistic movements that were in vogue, such as symbolism.

Zuloaga’s Parisian experience is essential for understanding his work as his painting, halfway between French and Spanish culture, greatly surpasses the limits that the traditional art historiography has placed on it, associating Zuloaga to the generation of 98 and thus the movement known as “Black Spain”, a Spain of deep, incomprehensible tragedy. Nevertheless, critics such as Charles Morice and Arsène Alexandre, poets like Rainer Maria Rilke, and artists of the ilk of Émile Bernard and Auguste Rodin considered the Basque’s painter’s work to be a benchmark for modern art.

It was in that dynamic pre-war Paris of the bright lights, the center of literary and artistic taste, where Zuloaga stood out in his own right, following a parallel path and comparable to many of the best artists of the time. It was period that was to end in 1914, not due to the development of the career of Zuloaga – who, once he had found his own voice and his place on the international stage, would continue working within the same parameters – but rather because Paris and Europe were to be completely transformed by the Great War.

Friendships: En Paris, Zuloaga trained in the studios of two of the city’s leading artists, Henri Gervex and Eugène Carrière. While there he was introduced to plein air painting, the heir to impressionism, and got to know artists such as Maxime Dethomas, Jacques-Émile Blanche and Toulouse-Lautrec. As from 1890, he showed his work in the Le Barc de Boutteville gallery alongside artists like Édouard Vuillard, Maurice Denis, Émile Bernard, Pierre Bonnard, Charles Cottet and Paul Sérusier, among other leading lights of the symbolist movement. Through Francisco Durrio, he made contact with Gauguin, considered the father of this trend, who held meetings at his house which Zuloaga attended assiduously. He also formed a friendship with Charles Morice, one of the leading proponents of symbolism. Influenced by this movement, Zuloaga began to experiment with the simplification of form, while still working with more sombre colors. Zuloaga moved in the ideal circles for his intellectual and creative development.

Émile Bernard and Auguste Rodin Zuloaga enjoyed a close friendship with the painter Émile Bernard and the sculptor Auguste Rodin. In the case of Bernard, who he met in Seville 1897, what united them was the same interest: admiration for the pictorial tradition and for the old masters. The relationship with Rodin came out of the deep admiration that the Basque painter expressed for the work of the sculptor. Both artists exchanged pieces of work, exhibiting together in various European cities and traveling through Spain together in 1905.

Portraitist: Zuloaga mixed with the social and intellectual elite of the French capital and played a prominent role as a portraitist in the Paris of the Belle Epoque. Thus, along with distinguished painters like Jacques-Émile Blanche, Antonio de La Gándara, Giovanni Boldini and John Singer Sargent, Zuloaga was one of the most sought after portraitists of the time as demonstrated by the portraits of Countess Mathieu de Noailles and Maurice Barrès.

The journey: One needs to understand the importance that the Parisian experience has in Zuloaga’s work as it enabled him to find his own artistic roots. The eagerness to discover the truly authentic led many artists, among them Gauguin and Bernard, to escape the capital in the search for a pure world, uncontaminated by industrial civilization. Zuloaga, however, undertook a journey in reverse, and left Spain to live in Paris only to return to find his Spanish roots, providing us with a vision of Spain in which realism and symbolism, tradition and modernity all merge together.