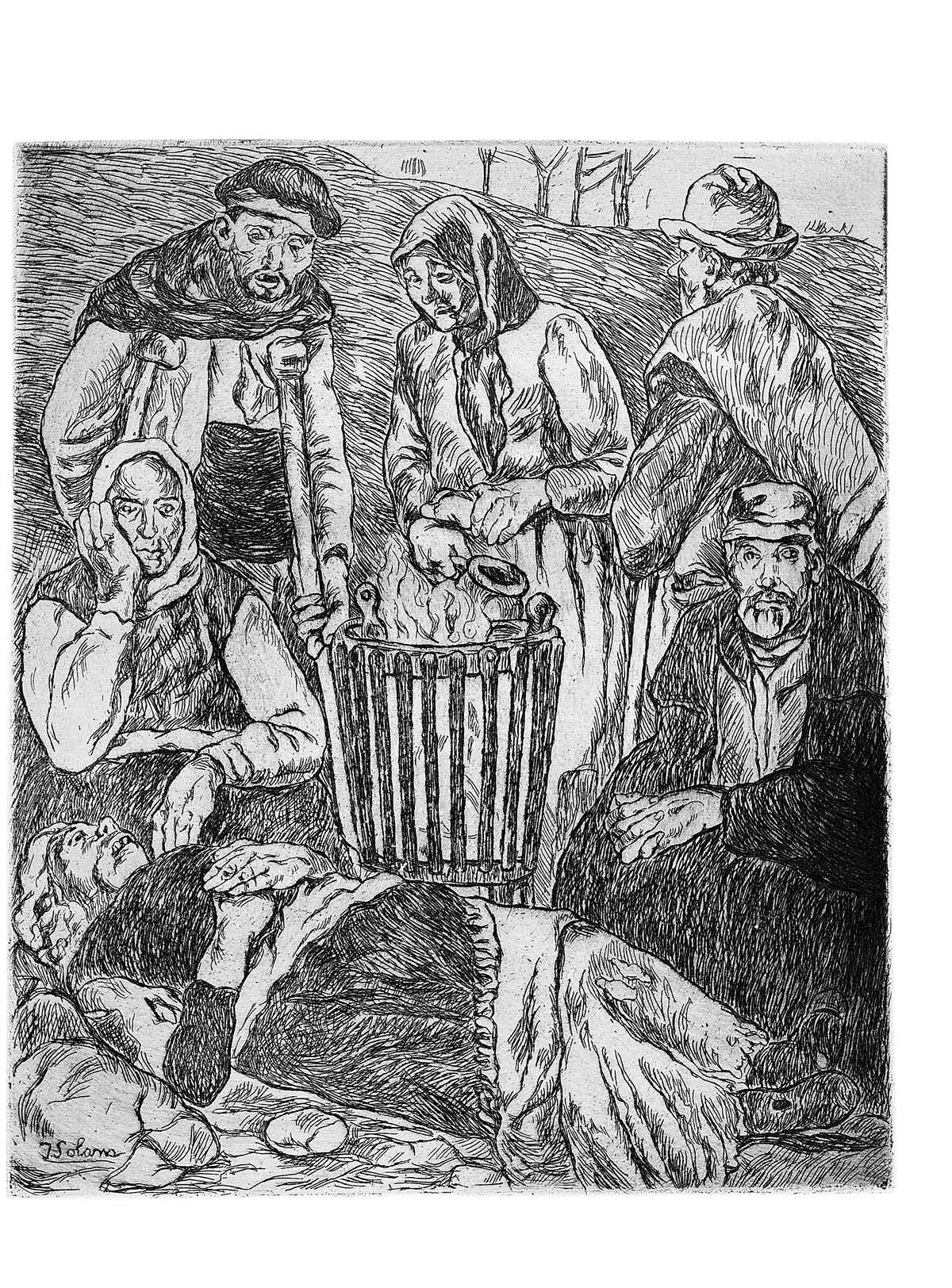 José Gutiérrez Solana is one of the most unique figures in Spanish art of the 20thcentury. Both his biography and his work reveal a stubbornly eccentric personality, which cannot be reduced to any typecasting within the framework of the conventional art scene, since his is a trajectory equally alien to the avant-garde – which he did not ignore – and to the academic tradition. Creator of a deeply personal vision, in his paintings, etchings and lithographs, as well as in his texts, Solana approaches the Spanish literature of his time, although he remains oblivious to any sort of criticism or evaluation. On the contrary, it shows us a dark reality in which it seems to move most natuarally. Throughout his career he focuses on a Spanish theme, continuing in the wake of Goya, Velazquez and El Greco. An admirer of Paul Cézanne, James Ensor and especially Honoré Daumier, the artist reflects the aesthetics of the traditional topic of “España Negra (Black Spain)” without being tied to this alone.

His engraved work is a “transcript of his oil paintings” according to Díaz-Casariego and, in fact, most of his prints reproduce the artist’s canvases in a more or less simplified manner. The painter began using the engraving technique around 1918 when he attended the escuela Nacional de Artes Gráficas (National School of Graphic Arts) in Madrid, although most of his prints and lithographs were produced at Castro-Gil’s workshop in the early thirties; during the Civil War he created three more lithographs in Valencia.

Fundación MAPFRE holds an important part of José Gutiérrez Solana’s body of work that includes 6 canvases, 25 etchings and 4 lithographs, created between 1917 and 1938, when the artist had already reached maturity. All the oil paintings became part of the essence of this institution in 1990, coming from the private collection at Chateau Mouchet in France and, with the exception of La baraja de la muerte (The cards of death), which followed a somewhat different route, having remained in a private collection in the United States for some time, formed part of an important solo exhibition which the painter held at the Parisian showroom la Gazette des Beaux-Arts in 1938.

The collection of etchings and lithographs consists of twenty-five of the twenty-eight catalogued etchings by the artist and four of the seven surviving lithographs. Within the set of etchings, fifteen are made on copper plate and the rest on zinc plates. Regarding his technique, it must be said that most are pure etchings although some include touches of drypoint and aquatint. All the prints are part of the print run made by Adolfo Rupérez and Juan Hidalgo from the original plates that the artist left after his death and which were published by Rafael Díaz- Casariego in 1963. These plates were rendered useless and deposited in  la Calcografía Nacional (National Intaglio Center), where they remain to this day. As regards the four lithographs, they belong to the print run made by Manuel Repila in Dimitri Papageorghiu’s workshop.