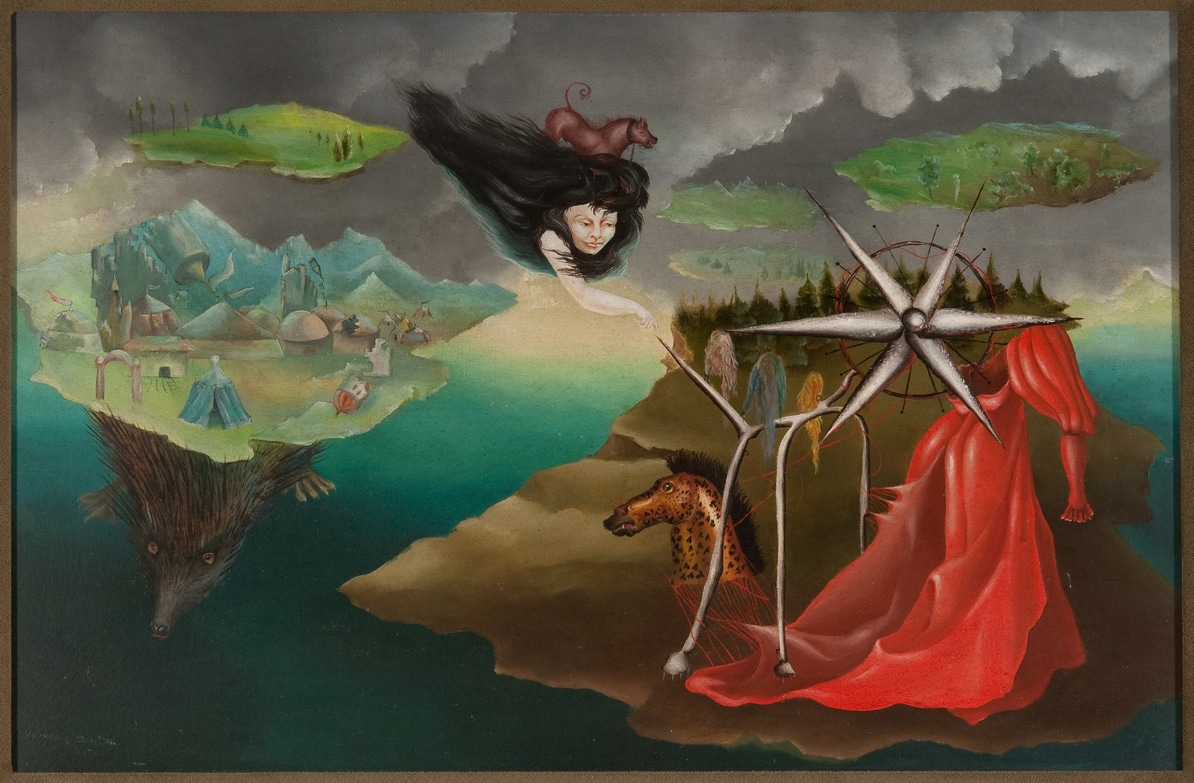 A painter, sculptor and writer, among numerous other activities, Leonora Carrington (Clayton-Le-Woods, Lancashire, 1917 – Mexico City, 2011) was one of the most significant women artists associated with the Surrealists. Although her career was always marked by her turbulent life story which made her an eccentric and tragic figure, her work should not solely be interpreted as the manifestation of an unstable mind. Quite the contrary; Carrington’s output is in fact the expression of a remarkable imagination which created an aesthetic, symbolic and conceptual universe, albeit one not always easy to decipher.

A versatile artist constantly engaged in a quest for new forms of expression, Carrington’s paintings, drawings, stories, writings, tapestries or sculptures refer to aspects of human beings (fear, pain, joy, alienation and happiness) in a direct manner which reaches out to us and obliges us to confront our own truths and uncertainties.

The exhibition aims to pay tribute to this unique artist and to disseminate the richness and complexity of a body of work that is well known in the United States and Mexico but which has only received greater recognition in Europe in the last few years. While Carrington had a notable influence on various artists of Spanish origin, her work has barely been exhibited in Spain until now.

(In the case of free access due to disability / reduced mobility, you can request a ticket reservation in advance by e-mail: cultura@fundacionmapfre.org).

Leonora Carrington. Revelation is structured into ten sections in which a chronological account is combined with the presentation of the most important themes in the work of this unique artist: from her training and early influences in England and Florence to her contact with the Surrealists in Paris, her time in Saint-Martin-d’Ardèche, the traumatic experience in Spain, emigration to New York, and Mexico as her new homeland.

For the realisation of this project Fundación MAPFRE has benefited from the support of more than 60 lenders, including leading institutions such as the Art Institute of Chicago, the Galleria Nazionale d’Arte Moderna e Contemporanea, Rome, the Museo de Arte Moderno and the Museo Nacional de Antropología, Mexico City, the Museum of Modern Art (MoMA), New York, the San Francisco Museum of Modern Art (SFMOMA), Tate Modern, UK, and the Tel Aviv Museum of Art. Alongside them, loans from prestigious private collections have also contributed to the success of this project.

The exhibition is organised by Fundación MAPFRE in collaboration with the ARKEN Museum of Modern Art in Denmark.

Escape to Spain: Following Max Ernst’s arrest and Carrington’s escape from the war in Europe, in 1940 she reached Andorra where she had a nervous breakdown and that August entered a psychiatric clinic in Santander. On the last day of the year she went to Madrid. There she visited the Museo del Prado where she reaffirmed her love of Florentine painting and also looked at the work of Bosch, Bruegel and Patinir, all of which enormously impressed her and would be decisive for her subsequent output. Her small canvases frequently include hybrid creatures that recall those in Bosch’s Garden of Earthly Delights, as well as backgrounds of strange landscapes filled with elements seemingly taken from dreams.

Carrington the writer: From a very young age Leonora Carrington was extremely interested in stories and this undoubtedly intensified after she met Max Ernst who, like all the Surrealists, was fascinated by Lewis Carroll and the brothers Grimm. The world of Carroll’s Alice allowed Carrington to focus on themes that particularly interested her: alchemy, the Kabbalah, ancestral myths and spatio-temporal dislocation, all elements present in her artistic output. It is said that she dictated her first story to her mother as she was too young to have learned to write properly. From then on Carrington never abandoned this activity and many of her paintings are paralleled in her writings, even sharing the same titles. Almost all of them are autobiographical, notably her account of the time she spent in Dr Morales’ psychiatric clinic in Santander, which she included in Down Below. Most of these stories feature hybrid creatures, fairies and powerful witches, speaking animals and humans that turn into animals, while fantasy becomes reality in “The Debutante”, “The Oval Lady” and in the novel The Hearing Trumpet, as well as in her plays Penelope and Opus Siniestrus.

Self-portraits/The alter egos: In her works Carrington frequently portrayed herself through other characters and animals that stand in for the artist herself. Her alter egos (“other selves”) generally take the form of hyenas, trees or horses, of which the latter are undoubtedly the most frequent, but we also encounter goddesses, including the White Goddess, and spinners and weavers who are sometimes represented by spinning wheels. The wheel and the spinners are thus allusions to goddesses and to female power. Spinning is associated with the female gender and with wise women, witches etc., and for many years Carrington herself produced tapestries in collaboration with the Rosales family of Mexican weavers.

Carrington the feminist: In the 1960s Leonora Carrington became increasingly interested in the feminist movements that were emerging with force in the United States, which she frequently visited. Although never an active member, her house in Mexico became a meeting place for a small group of women concerned for the inequalities in women’s lives and their lack of rights. The painting Mujeres conciencia [Women’s awareness] (1972) was used for the poster of that title as an expression of “indignation and anger regarding the situation of women”, as Carrington herself said in an interview. In this gouache she subverts the myth of Adam and Eve, making the latter a goddess. Carrington’s desire to convey to women the message of rediscovering and recovering their powers is a recurrent one throughout her literary and pictorial oeuvre.

Carrington’s encounter with Robert Graves’s text “The White Goddess” stimulated her feminist consciousness. “Most of us, I hope, are now aware that a woman should not have to demand Rights. The Rights were there from the beginning; they must be Taken Back Again, including the Mysteries which were ours and which were violated, stolen or destroyed,” in her own words.