Statistics help us learn about the percentage of road traffic accidents and act accordingly. According to UNICEF, 250,000 children and adolescents around the world are killed in road traffic crashes every year, and another 10 million are seriously injured. In many OECD countries (Organisation for Economic Co-operation and Development), road traffic accidents are the leading cause of death among children under 15 years of age.

The number of children killed on the road every year in these countries has been halved between 1984 and 2000. However, one child in every 2,100 will die in a road traffic accident before he or she reaches the age of 15.

In Spain, these figures are smaller but equally devastating for many families.

Discover all the statistics

The fatality rate for children under the age of 14 was 0.5 that year, while for the rest of the population it was 1.3. The child fatality rate per million inhabitants was 5, but it reached 43 for the other age groups. 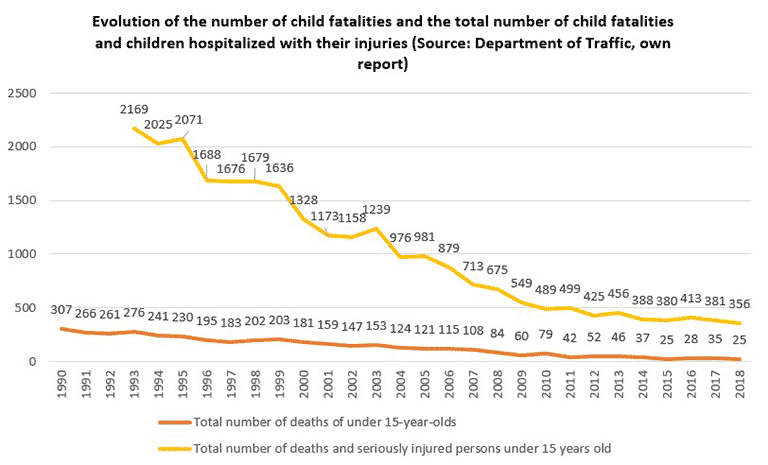 In Spain, the majority of children under 15 years of age who died in road traffic accidents  in 2019 were travelling in passenger cars or vans, or on foot.

In terms of serious injuries, 53 % of children under the age of 15 who were seriously injured in road traffic accidents were pedestrians. 29 % per cent were passengers in a car and 10 % were travelling in a bicycle. 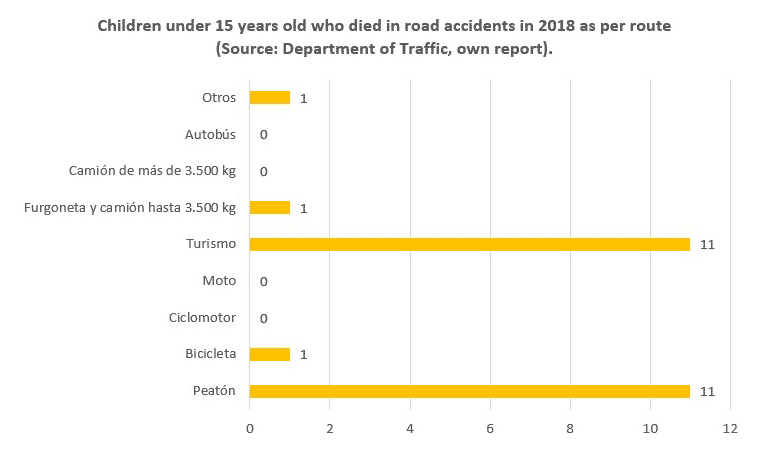 In general, the body areas where children are most frequently injured in road traffic crashes, as concluded by CREST – a European research project –, and the key preventive measures in each case, are:

Please remember: speed is a key factor in the risk of injury. In the event of a road traffic crash against a fixed, rigid object, driving at 30 km/h is equivalent to falling from a first-floor window (about 3 metres high), while driving at 120 km/h is equivalent to falling from an eighteenth-floor window. Therefore, such simple acts as buckling up when getting into a vehicle, securing a child properly in a certified child-restraint system appropriate to its weight and height, or wearing a helmet when riding a motorcycle or a bicycle would have saved at least half of the victims that failed to use these safety devices.

WE MUST INSIST. This is extremely important: children must travel in a child car seat, even if driving only at 50 km/h. THE IMPACT SPEED IS EQUIVALENT TO FALLING FROM A THIRD-FLOOR WINDOW!