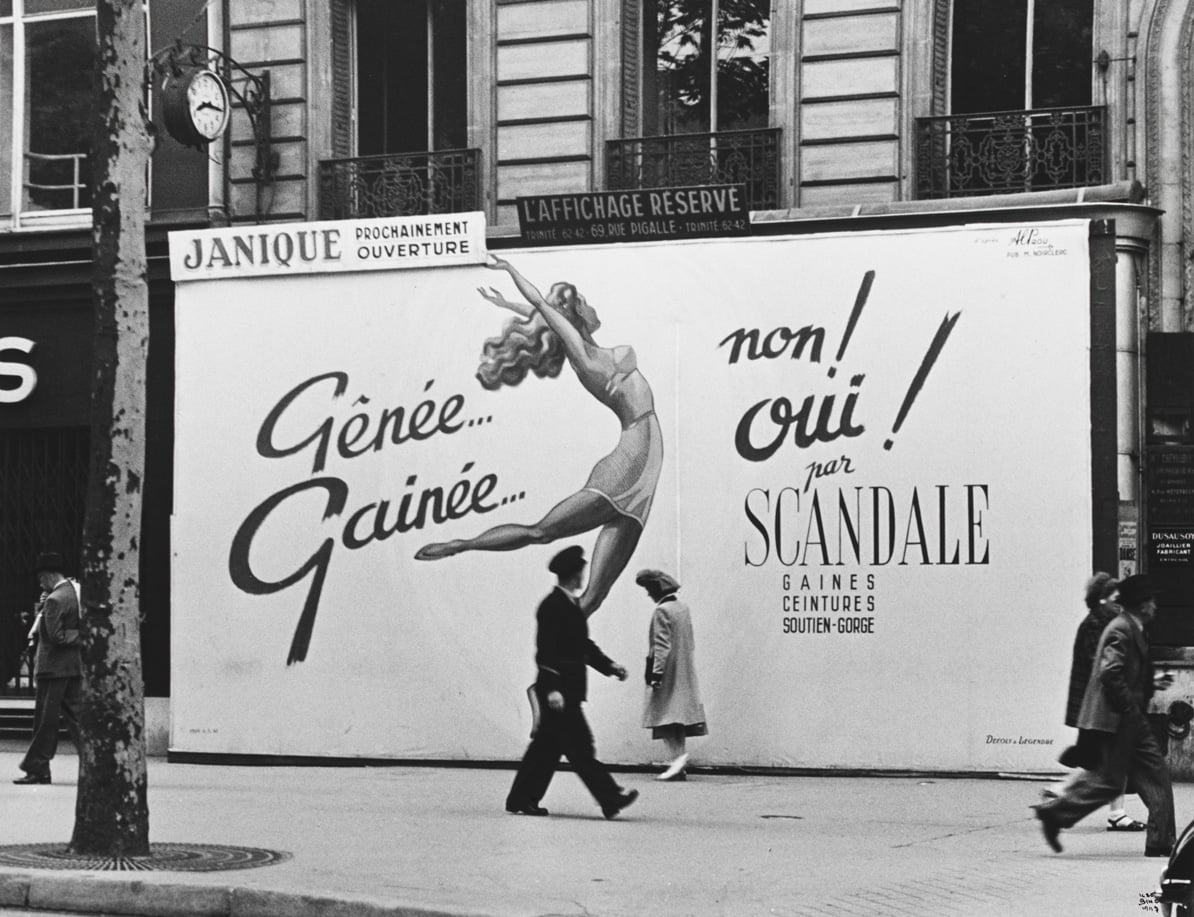 Opening times:
Until March 30:
Mondays (except holidays): Closed.
Tuesday to Sundays (and holidays): 11 am – 7 pm

*The evacuation of the hall starts 10 minutes before closing time. Last access (6:30 pm – 7:30 pm) only allows a 20 minutes tour to the exhibitions.

Born into a wealthy Jewish family, Ilse Bing (Frankfurt, 1899 – New York, 1998) discovered her artistic vocation in 1929 when she started to take photographs to illustrate her university thesis in art history, a subject she abandoned in order to devote herself entirely to photography. She thus embarked on a unique and fascinating life and career that would continue for three decades with regard to her photographic activity.

In 1930 Bing moved Paris where she focused in professional terms on photo-journalism while also undertaking her own work, which soon led her to be considered one of the new names in the field of photography who were currently emerging in the dynamic cultural context of the city at that time. Obliged to go into exile following the Nazi occupation, in 1941 she arrived in New York with her husband, the pianist Konrad Wolff. Almost twenty years later, in 1959 the sixty-year-old Bing decided to abandon photography and from then on focused on the other visual art forms and poetry until her death.

Bing’s photography cannot easily be located within the movements and trends that inspired it. She produced works in all the major genres, from portraiture and self-portraiture to depictions of everyday objects, street scenes, landscape and images of buildings, but with a stylistic diversity that conveys her highly individual and significant reading of the different cultural trends that she was associated with: Parisian Surrealism, the influence of German New Objectivity and the Bauhaus, and finally the inexhaustible drama of New York as a great metropolis.

Online tickets sale will be available from February 1st

Ilse Bing’s work is now divided among various collections in Europe and the United States and this is the first occasion on which it can be seen in a completely survey in Europe.

Comprising nearly 200 photographs and a range of documentary material, the exhibition offers an exhaustive survey of Ilse Bing’s career in the form of ten chronologically and thematically structured sections: “Discovering the world through a camera: the beginnings”; “The hustle and bustle of the street”: the French years”; “The life of still lifes”; “Lights and shadows of modern architecture”; “Self-image revelations”; “The United States in two stages”, “The dancing body and its circumstances”; “Self-image revelations”; “Live nature”; and “The seduction of fashion”.

In its presentation in Barcelona the exhibition includes two significant additional elements with respect to its showing in Madrid, namely the inclusion of four photographs loaned from the collection of the Musée Carnavalet, Paris, and the projection in the exhibition space of the interview Drei Fotografinnen: Ilse Bing [Three photographers: Ilse Bing] (1993: 54 mins). Made five years before Bing’s death and directed by Antonia Lerch, it is part of a project that also included conversations with two other Jewish women photographers: Ellen Auerbach and Grete Stern. In the film Bing is already in frail health, moving around her the narrow space of her small apartment with some difficulty, but nonetheless able to describe her life and work with absolute lucidity. The result is a moving testament which reveals the enormous vitality and profound creative impulse that makes Bing’s photographs fundamental images in photography of the first half of the 20th century.

Architecture. Constructivist architecture, which emphasised the social aspect of the discipline, was widely recognised outside the Soviet Union thanks to El Lissitsky who promoted the movement abroad. From 1910 onwards the city of Frankfurt became the prototype of modern urban design through the work of the architect Ernst May and the city gradually abandoned its medieval layout in favour of a transformation based on different social requirements. Both Constructivist and Bauhaus theories were extremely influential for Bing’s work. Following her arrival in Paris she focused on one of the city’s most important monuments, the Eiffel Tower, built for the Universal Exhibition of 1889. The Tower had been photographed in 1925 by László Moholy-Nagy, who had an important influence on Bing. Not only, however, did she focus on the beauty of the forms and the abstract beauty of the Tower’s construction but she also captured the area around it by photographing it from inside the tower at different heights.

The same would be the case with New York’s skyscrapers, which she photographed with a distanced and simultaneously critical gaze through the device of including low-rise, humble buildings in the same shot.

Surrealist objects. From an early date Ilse Bing was notably interested in inanimate objects: still lifes, chairs, newspapers, etc, all common motifs in art in the first three decades of the 20th century. Surrealism brought about a revolution with regard to objects of this type in its addition of a certain indissoluble element of magic and mystery in the compositions. Particularly in her Parisian period, Bing’s depictions of everyday objects are imbued with a degree of almost dream-like melancholy. In contrast, during her time in exile in New York her images reveal a sense of distance and also the appearance of formal and symbolic traits such as the enclosing or delimitation of the depicted scene.

Movement. During the years she lived in Germany Ilse Bing had already focused on the movement of the dancers at the school of Rudolf von Laban, considered the founding father of Expressionist dance. After her arrival in Paris, Bing was commissioned to photograph the waxwork museum of the Moulin Rouge. While undertaking this project she also photographed everyday life on and off stage, particularly the dancers in movement. Bing captured the vibration of the dance with its circular leg movements and the dancers performing the splits in profile. In addition to the series of photographs she took of the dancer Gerard Willem van Loon, one of Bing’s most important projects on the theme of movement centred on the ballet L’Errante, choreographed by George Balanchine and with sets and libretto by the Russian painter Pavel Tchelichew for the Ballets Russes. It was first performed at the prestigious Théâtre des Champs-Élysées in Paris in June 1933 and subsequently in London.

A pioneer of photography. Ilse Bing was part of a generation of women photographers who achieved an unprecedented visibility, among them Germaine Krull, Florence Henri, Laure Albin-Guillot, Madame d’Ora, Berenice Abbot (the subject of an exhibition by Fundación MAPFRE in 2019), Nora Dumas and Gisèle Freund. It was not common for women to be artists at this date and this field was largely occupied by men who regarded the presence of women in the social and cultural sectors with disdain, if not overt hostility. Nonetheless, Ilse Bing used her camera as a means to affirm her identity and proclaim her independence.