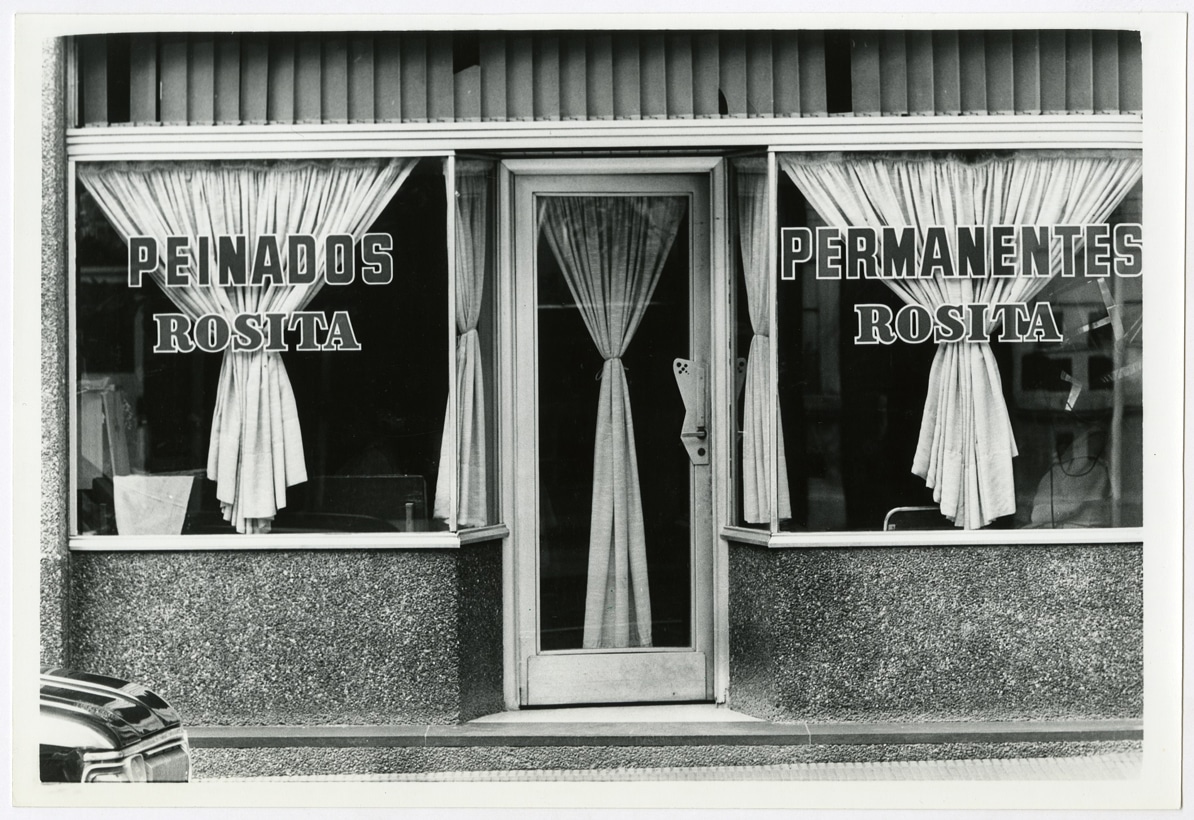 For Facundo de Zuviría (born Buenos Aires 1954), photographing his native city is a way of photographing the world. When he decided to devote himself to the medium in 1983 one of his first intentions, arising from his involvement in a cultual programme in the city’s barrios, was that of creating a visual archive of Buenos Aires. That project was never realised but since then Zuviría has never ceased to photograph its streets, façades, interior courtyards, shop windows, traffic lights, posters, promotional signs and pedestrians; all the multiple elements which together create the city’s appearance.

In this way, and over the past forty years Zuviría has constructed a parallel image of the city, his own image of it, based on a seemingly dispassionate gaze but one that is both evocative and nostalgic.

Zuviría’s aesthetic reveals the influence of some of the great urban photographers, such as Walker Evans and Horacio Coppola (the latter considered the father of modern Argentinian photography). He is also influenced by visual art, including American and British Pop Art and Edward Hopper, and by literature; it is not by chance that another tireless flâneur of Buenos Aires, Jorge Luis Borges, is his favourite writer.

(In the case of free access due to disability / reduced mobility, you can request a ticket reservation in advance by e-mail: cultura@fundacionmapfre.org).

Facundo de Zuviría. Images of Buenos Aires surveys forty years of the artist’s career, from 1982 to 2022, through 195 black and white and colour photographs. It is presented as a linear account in the manner of a continuous flow, only interrupted by the series “Argentinian Siesta”, the artist’s best known and most political one, and “Frontality”, an outstanding example of his interest in composition and symmetry.

Zuviría employs two fundamental working methods. Firstly, projects that continue over a lengthy period of time which arise from a previous idea and in which each image is subordinate to a particular concept, as in the case of “Frontality”. That series, started in 2010, was initially intended to come to an end but is still ongoing today. This is also the case with “Images of Buenos Aires”, which Zuviría considers his most personal creation given that it is based on motifs that he constantly returns to during his regular walks around the city. Secondly, the artist creates series in a self-contained and time-limited manner, as with his photograms (1981-83), sequences (2000-04), the above-mentioned “Argentinian Siesta” (2001-03), and the cyanotypes of books that he produced during the pandemic (2020-21), to cite just some examples.

Vernacular Pop: one of the most important aspects of Zuviría’s work is the influence of Pop Art, even when this is unconscious. His ability to capture the vernacular throughout his series “Images of Buenos Aires”, to cite his most extensive and long-lasting project, is one of the artist’s most important characteristics. Zuviría ennobles elements of consumer society such as posters, advertising hoardings and signs for bars and restaurants, giving his work the “smell” of Buenos Aires.

The barrios: for Facundo de Zuviría the essence of Buenos Aires is not to be found in the city centre but in the barrios, which were still suburban areas in the early 1980s and which he found less impersonal. As the artist himself said in an interview published in the newspaper Clarín in 2015, two aspects of these areas of the city attract him: “The one-storey houses, that aspect of being built-on pampa characteristic of Buenos Aires, which is a flat plain with a lot of sky. The shop fronts, measuring 8.66 metres wide with two flanking windows and a central door that create a triptych, with every possible variety within that structure.”

The corralito: on 3 December 2001 the corralito was declared in Argentina, which was a government measure that included banning people from taking money out of their own current accounts, savings accounts and financial investments. This led to a profound economic crisis. The restriction on money supply had the consequence of strangling the economy and paralysing trade and credit. The societal upheaval resulting from such a drastic measure, the effect of which lasted for several years, can be located within the context of the political crisis that followed the resignation of president Fernando de la Rúa on 21 December. His successor, Adolfo Rodríguez Saá, was in office for just one week (23 to 30 December) and was replaced by Eduardo Duhalde, who became president of the Republic on 2 January 2002.