Learn about the main anti-rotation systems for child car seats


Road Safety
The ISOFIX system holds approved child restraint systems in place with anchors on their lower rear part. If the system relied only on these two anchors, ISOFIX child seats would be secured, but in the event of an accident, pitch rotation  or tilting forward may occur.This is precisely what the third anchor point of the ISOFIX system seeks to avoid.The ISOFIX system comprises two anchors that secure the CRS and that are positioned on the lower rear part of the child seat.The hooks are located in the car’s back seats, normally the two side seats, right where the seat joins the backrest.Additionally, there is a third anchor, an upper anchor point for securing the upper part of the child seat’s backrest (Top Tether) or a Support Leg.Both the Top Tether and the Support Leg are anti-rotation systems.

What is an anti-rotation system?

In the event of a traffic accident, there are two stages.The first stage is when speed and deceleration cause the body and all objects to be thrown forward at the same speed at which the car is travelling.When the car comes to a halt the child seat then recoils.This is the second stage.At that moment, the third anchor point prevents the top of the child seat from tilting or tipping forward.It prevents the child seat from rotating.Although all of the restraining force restraining is borne by the lower anchors, the anti-rotation system prevents the child seat and the child from being thrown forward.A seat belt does not provide an anti-rotation system.Bear in mind that using an ‘ISOFIX’ system in combination with a seat belt cannot be referred to as a CRS with ISOFIX anchoring.The ISOFIX system does not use the seat belt precisely in order to avoid errors when installing the child seat. 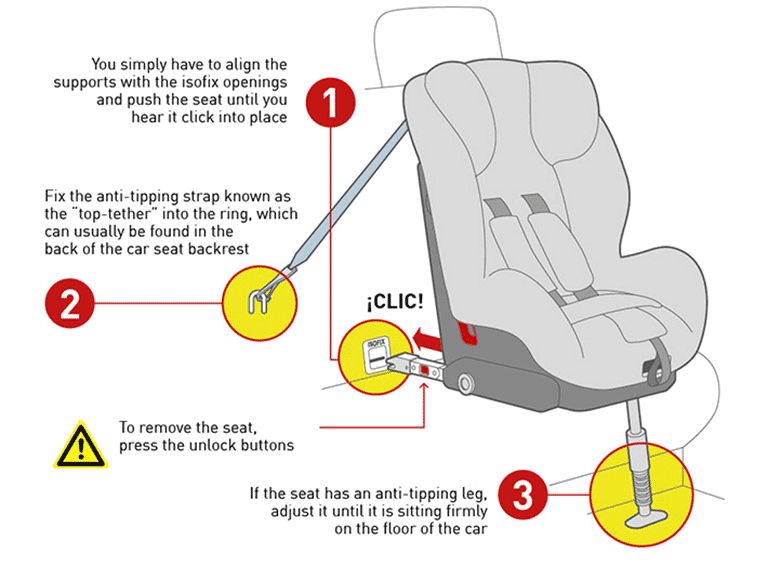 Support Leg: Another type of third anchor point. It is the alternative to the Top Tether. It is used with Group 0+ and I child car seats, both in rear-facing and forward-facing seats. It is a leg that needs to be extended until it rests on the floor of the vehicle.

Lower Tether: It is another system intended to prevent rotation. It is a strap that comes out from the back of the child car seat and that has to be secured to the floor of the vehicle.It usually attaches to the front seat guide rail.

Some manufacturers such as Römer have also developed other systems to avoid this recoil. For example, Pivot Link. In this case, the connectors are not fitted to the bottom part of the child seat but are set at a certain height. This way, in the event of a frontal collision, the rotation of the connectors pushes the child seat downwards thus absorbing the energy. It can also be used with a Top Tether or Support Leg. It has only been developed for built-in forward-facing child seats.