Drugs, recreation and driving is a potentially lethal combination. Around 23% of drivers under the age of 30 who die in road accidents have taken drugs.

In the last few years, numerous campaigns have been rolled out against the use of alcohol and driving, either trying to raise people’s awareness or with the threat of punishment by means of fines and loss of points from drivers’ licenses. However, drugs are just as dangerous as alcohol and their use is becoming more and more widespread.

According to the DRUID’13 Study and the 2013 Report by the National Institute of Toxicology and Forensic Sciences, of drivers between the ages of 18 and 24, 15% tested positive for cannabis and almost 4% for cocaine. We need to remember that the effects on the body remain for up to three to four hours after their consumption. It is also worth mentioning the fact that of those who tested positive, 93% were men and only 7% were women.

In 2013, the National Toxicology Institute analyzed the blood samples of 557 drivers who had died in road accidents; of these, 43% showed positive for drugs, alcohol, psychotropic drugs or a mixture of them all. Although there has been a slight drop in the consumption of alcohol, falling from 35% to 28% since 2012, we have seen an increase in the consumption of drugs, rising from 12% to 15%, and from 13% to 14% in the case of psychotropic drugs.

In addition, the Official State Gazette of 8 April 2014 regulated administrative penalties for the mere presence of drugs in a driver’s body, making driving under the influence of drugs a criminal offense and upholding the use of devices for detecting drugs in saliva, which have proven to be a legally reliable, non-intrusive method which is viable from the police force’s perspective.

When talking about drugs that have an effect on driving, we are essentially referring to the following groups: opiates, cocaine, cannabis and designer drugs. Each one acts in a different way, and below we describe the effects they have on our bodies and how they affect drivers.

We should not forget that apart from all these illegal drugs, a huge amount of prescription drugs are taken in Spain which can also affect driving, such as benzodiazepines and hypnotics, a subject on which we will be devoting an article in May. We need to emphasize the precautions that people should take when driving whenever these drugs are prescribed. Psycho-pharmaceuticals have been found in 4% of road accident fatalities. These drugs are more commonly taken by middle aged and elderly people than by youngsters, who are more likely to show positive for recreational drugs. 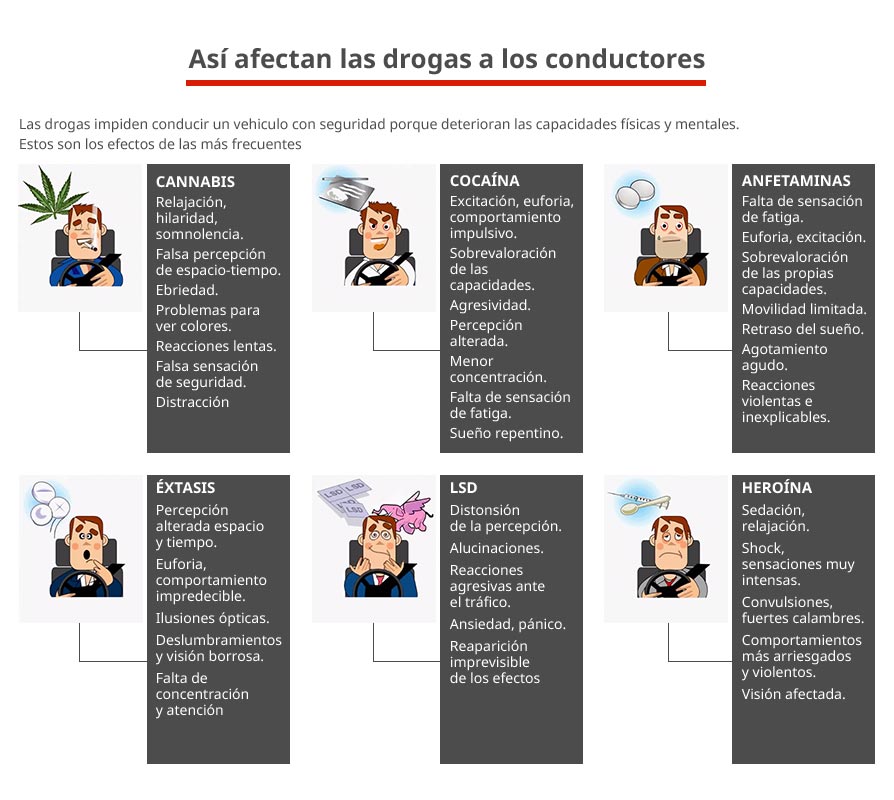 Finally, it should be remembered that the leading cause of death in people aged 15 to 24 in Spain is traffic accidents, and that the consumption of drugs and alcohol plays a big part in these accidents.

Despite the drop in the number of deaths from road accidents in recent years, it is still a major public health problem. It is the primary cause of death among young people aged 15 to 24 and we should not forget that of the drivers who died in 2013 whose blood was analyzed by the Toxicology Institute, 43% showed positive for drugs, alcohol or prescription medicines.

In view of this problem we need to achieve a goal of zero consumption at any age, with the following advice: