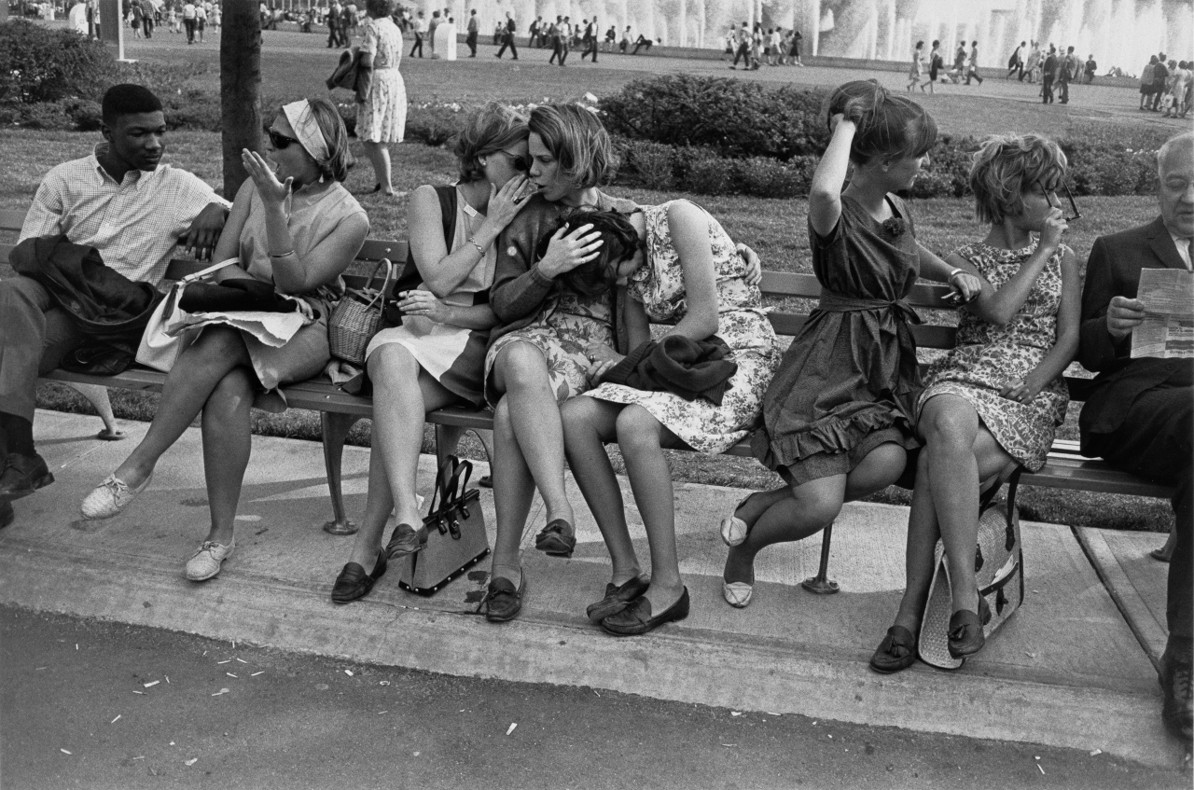 The exhibition Garry Winogrand, hosted by the KBr Fundación MAPFRE photography center in Barcelona, aims to highlight the importance of some of the best photographers of the second half of the 20th century for the study of this discipline and, in the specific case of this artist, as a key figure in the renewal of documentary photography.

In 1978, John Szarkowski, considered one of the most influential personalities in creating interest towards photography and director of the Department of Photography at the Museum of Modern Art (MoMA) in New York since 1962, defined Garry Winogrand (New York, 1928-1984) as “the most important photographer of his generation“.

His photographs encompass three decades of extensive work “in and between” the urban flow, through which he represents a reality that is shown as it is, without moral judgments, as if it were a catalog of everyday life. In 1963, to apply for his first Guggenheim Grant, he wrote: “I have been photographing America to try […] to try to find out who we are and how we feel, observing what we look like as history evolves and is still evolving around us in this world,”. He also expressed the dismay he felt at discovering that the dreams of the American citizen are “cheap and trivial” and built on “appearances and fantasies.”

The exhibition, a compilation of the artist’s best-known black and white photographs, is enriched with new contributions and offers little-known aspects of his career. In the early 1950s the author began using color slide film as he was quick to sense its artistic possibilities. These works, which are being shown for the first time in Spain and from which one hundred and fifty-two have been selected, complete the chronological journey we offer through his extensive oeuvre.

Winogrand’s way of working, almost compulsively, shows the chaos and vitality of American society of the 1960s in his city, New York, but also in the different places he visited, as of 1955 he traveled by road through much of the United States. In 1973 he moved to Austin, Texas, where he combined his career as a photographer with teaching. Five years later he moved to Los Angeles, where he lived for six years. In February 1984, he was diagnosed with gallbladder cancer and died two months later at the age of 56.

With this exhibition we want to shed a new light on one of the fundamental artists in the history of this discipline, who was described as “the most important photographer of his generation“, which places him on a par with other emblematic names in photography such as Walker Evans or Lee Friedlander.

United States in the postwar period: after World War II, the victory gave Americans a breath of hope. The Great Depression and the crash of ’29 had ravaged the country and many feared that after the war the good times would never return. However, the country embarked on a period of economic wealth accompanied by a new freedom. Social and even racial restrictions were beginning to loosen. However these were also times of unrest. The fear of subversion, of further emancipation of people of color, of excessive freedom, of nuclear weapons, seemed to be on the minds of much of the population. The undercover persecution of those considered as “left-wing” marked one of the aspects of the Cold War period. These contradictions, a prosperous and strong environment, the seemingly achieved “American way of life” mixed with the sense of fear, even anguish, are reflected in the work of Garry Winogrand like no other photographer of his generation.

The street: around 1957 the artist abandoned his job as a photo-journalist on assignment for illustrated magazines and focused exclusively on his personal work and advertising. After his first solo exhibition in 1960 at the Image Gallery in New York, he began to use different techniques and resources to capture the energy and vitality of the city’s streets, such as wide angles or inclined shots, which allowed him to consider himself a serious photographer. Far from sentimentality, he pursues authenticity and sincerity, both in his life and in his work. His images manage to capture the spirit of a whole generation that, after a period of prosperity, hides a feeling of unease for a world that is apparently capable of facing anything and yet seems doomed to collapse.

Fragmentation: Garry Winogrand’s images, against the current of photographic trends, do not always give an explanation of what they portray, because the artist moves in the field of a certain ambiguity. We see the main figures cut off, close-ups that focus on an item in the corner of a photograph, or flashes of light that prevent us from understanding at first glance.

His photographs generate bewilderment and make us wonder what the image is really telling us. Who is the character we are looking at or the reason behind the split scene. It is as if the artist is also asking himself the same questions, and doesn’t always get an answer because, in reality, he is more interested in how the images convey the world, than in what they say about it. In spite of everything, Winogrand was never given to explaining his work. On one occasion, when asked about the reason for his images, he said:”I take photographs to discover what something will look like once it has been turned into a photograph,” thus rejecting its narrative or symbolic nature.

Color: in 1967, a selection of 80 color slides by Garry Winogrand was presented for the first time at the landmark exhibition New Documents, held at the MoMA in New York. Due to technical difficulties with the projector, which broke down and burnt about ten of them, they were removed from the exhibition. So during the artist’s life, these color images were barely known. However, in meetings with friends and in his classes, the author showed these slides in a slide-show format similar to the format created in the exhibition that we are presenting. This is the first time this part of his work can be seen in Spain.

The Center for Creative Photography in Tucson (Arizona), which is the custodian of his legacy, currently preserves more than 45,000 of his color slides. We thank them for their support and participation, which has allowed this exhibition to become a reality.