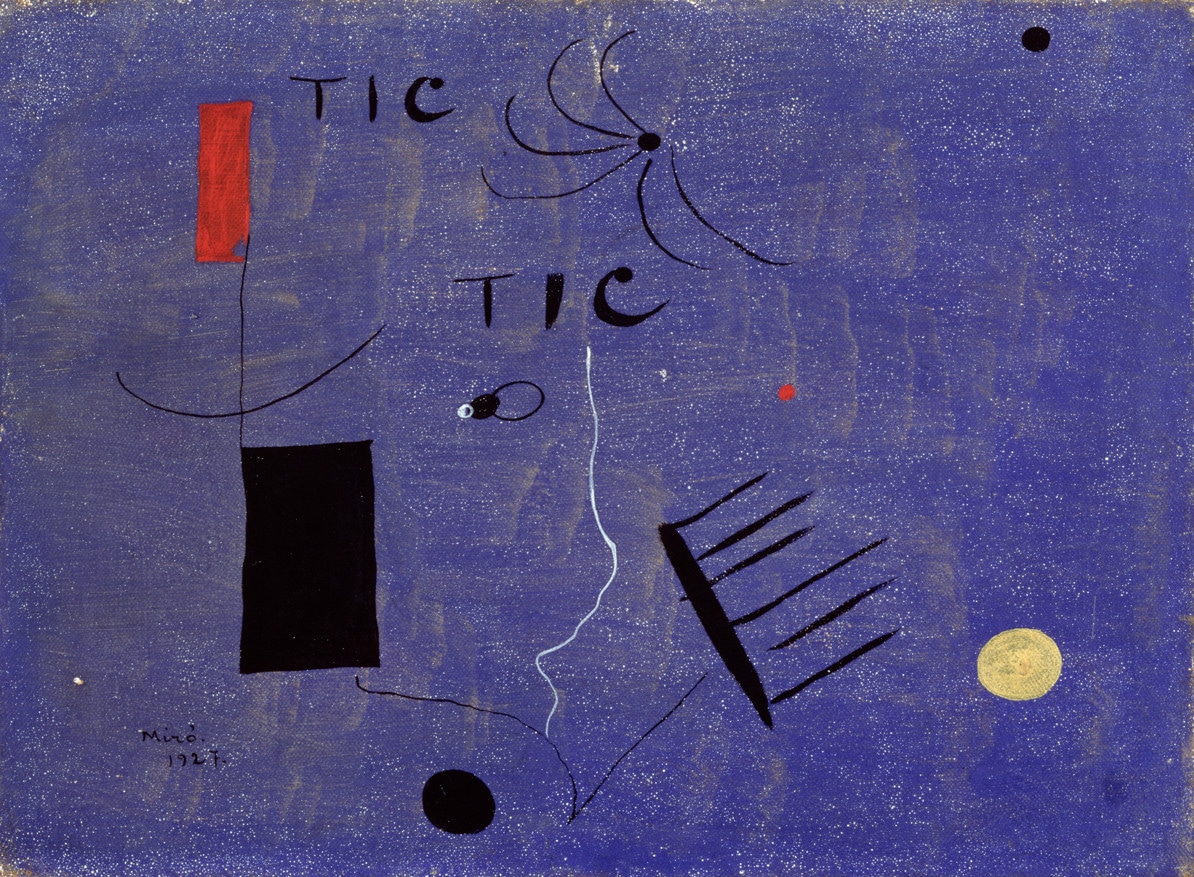 As a passionate reader and a good friend of poets, Joan Miró (Barcelona, ​​April 20, 1893 – Palma de Mallorca, December 25, 1983) explored the paths of both painting and poetry simultaneously in his work, though eschewing any form of academicism, in a personal quest that did not ascribe to any particular movement. Throughout his life, poetry was a source of inspiration for him.

The Miró Poema (Miró Poem) exhibition complements the permanent exhibition on the Catalan artist’s work, Espacio Miró, which can also be visited at our Sala Recoletos venue. It offers a different perspective that aims to decipher the role of poetic writing in Miró’s artistic career, and analyzes the close relationship that the artist established with several poets of his time.

The exhibition was organized by Fundación MAPFRE with the special collaboration of the Joan Miró Foundation in Barcelona.

“I make no distinction between painting and poetry,” said Miró at one point. This assertion embraces the entire production of the artist, who always tried to find ways of transcending painting, of expanding its limits. And in poetry he found the most profound and enduring way of doing so. Thus throughout his career he played with different ways of including poetry in his work, of trying to transpose the way writers do things to the languages of painting, with a firm belief in the “extremely disturbing nature of the written page”.

Through a selection of paintings, drawings, illustrated books and handwritten poems, this exhibition aims to shed light on this connection by means of two different yet parallel lines. As the curator, Carlos Martín, points out: “One is more complex and speculative; the one that seeks to unravel the role of poetic writing in his concept and practice of painting from the 1920s though to his later work, both conceptually and literally. The other, more direct line, refers to his many collaborations with different poets in a constant interplay between word and image, between linguistic signs and pictorial brushstrokes.”

Miró and poets: Miró’s relationship with literature is inseparable from his activity as a plastic artist right from his earliest days. This aspect does not simply refer to the level of an individual with a profound interest in books – as evident in his library, currently in the safekeeping of the Joan Miró Foundation – but rather through the history of his relationships with writer and poet friends, with whom he established a kind of dialogue that would later be conveyed in his works. These friends included Michel Leiris, Tristan Tzara and Paul Éluard, to name the most well-known ones, as well as Spanish writers such as Josep Maria Junoy and Joan Brossa. This bond with poetry is, to a large extent, what motivated him to explore the knowledge and techniques of graphic work in greater depth. The illustrated book gave him the opportunity to meld image and text in the same universe. Furthermore, this dialogue sparked off other paths of investigation in his pictorial work, pointing to the way linguistic signs (letters, figures, words, and unfinished sentences) occupied his canvases and drawings.

The distillation of painting: In the mid-1920s, Miró started experimenting with a compositional model based on figures floating in an indeterminate ether, often blue. Miró was able to pursue his longed-for vocation as a painter-poet by applying to these works the mechanics of distilling language, the nudity of words, a practice of many of the poets with whom he mingled at that time. The artist usually started from detailed drawings which were pared back until the final version that appears on the canvas. In addition, these figures that seem to form constellations were overlaid by the practice of automatic writing and the random relationship of ideas that André Breton and Philippe Soupault pioneered in their text Les Champs magnétiques (The Magnetic Fields).

It is likely that Rubén Darío’s poetry collection Azul (Blue) was also a source of inspiration during this period, especially in terms of the color’s preeminence in many of his works and, in general, in the search for synesthesia. Blue is one of the colors of mysticism, also associated with sleep, the sky, and the depths of the sea. This color, upon which the pictorial elements and signs are arranged in a seemingly random way, determined some of his more ascetic paintings, stripped of almost everything accessory and reduced to the essentials, such as La Sieste [La Siesta, 1925].

Poetry thus appeared in these works between 1924 and 1928, although they still resisted the loss of their reference as, literally, paintings, something the artist himself made clear in the titles he gave them: Peinture ‘Tête de fumeur’ [Painting ‘Smoker Head’, 1924], Peinture ‘Femme, tige, coeur’ [Painting ‘Woman, Stem, Heart’, 1925] and Peinture ‘TIC TIC’ [Painting ‘TIC TIC’, 1927].

The artist’s books: In 1920, Miró went to Paris for the first time and settled there on Rue Blomet. In the French capital he met Tristan Tzara, Pierre Reverdy and Max Jacob, as well as the artists in André Breton’s circle. These friendships led to changes in his painting and literary ideas – since Surrealism originally arose from literature – and fully imbued his pictorial terrain. Over the years, he illustrated books by many of them, such as Parleur Seul [Speaking Alone, 1948-1950], a poem by Tzara, and À toute épreuve [Foolproof, 1958] by Paul Éluard. Yet 1928 was the date of the first of them: Il était une petite pie [Once Upon a Time a Little Magpie], featuring texts by the poet Lise Hirtz, in which Miró created eight pochoirs or stencils, one of the simplest printing systems as it entailed obtaining a print from shapes cut out on a template and then inking a fine silk fabric placed over it. The result was not just an illustration of children’s poems, which Hirtz dedicated to her daughter Hyacinthe, but the Catalan artist’s interpretation and representation of the words on paper. Miró said: “[…] I enter the poet’s feelings. I give it a huge amount of thought. Both things simultaneously: the architecture of the book and the meaning of the text. I then do a lot of drawings, very quickly, no matter what kind of paper I have to hand. This is the second phase… and I’m already thinking about the third one, which I’m preparing now. Very deeply about the meaning of the text and the architecture of the book.”

From ‘painting’ to ‘poem’: In 1927, following the line defined by the titles of his works, which as we have already mentioned can be largely summed up simply as Peinture [Painting], Miró went one step further: seeking to explore the literary aspects of his work in greater depth, he entitled one of his paintings as Peinture-Poème [Painting-Poem]. An enigmatic phrase appears in this work – ‘beaucoup de monde’ – which might be translated as ‘too many people’. However, these people do not appear anywhere in the painting, an ochre canvas in which only a few lines, dots and arrows appear, expressing an almost elegiac silence.

Many years later, in 1968, Miró moved forward in his career without forgetting what he had already created. Finally, these works that stemmed from poetry but still retained their title of ‘painting’, were literally transformed into poems. Thus reads the title of a group of canvases on which he worked at this time, which can be seen in the last section of the exhibition. These no longer refer to preexisting, non-existent or yet-to-be-written poems. Black strokes and stenciled letters show just what they are – poems – just as if Miró’s struggle with the word had reached a conclusion and he had won the battle.

If you would like to contact the Communication Department to request the press dossier, high-resolution images or for any other matter, please complete the form below, giving the name of the medium/media for which you require this information.
See all the Exhibitions of 2021
You may also like