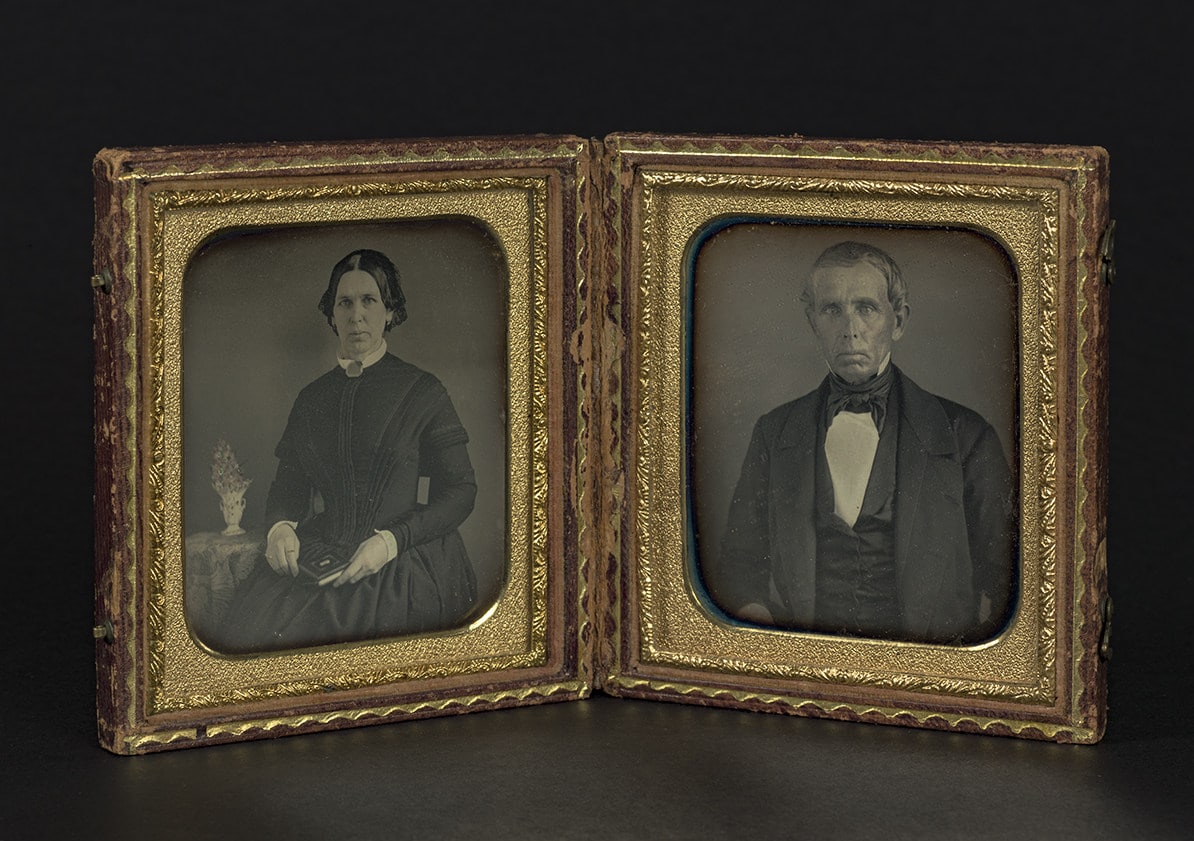 From their initial appearance in 1839, daguerreotypes aroused fascination with the way their small silver plates seemed to capture the enigma of human identity. In huge demand among every level of society, especially in cities, they became an essential element in making photography such a huge and accessible phenomenon right from the outset.

Organized in collaboration with the CDRI – Girona City Council.

Curators: Joan Boadas and David Iglésias (Head of the Document, Archive and Publication Management Service; Head of the Graphic and Visual Documentation Section, respectively, of the CDRI).

From the time the first image was produced on a plate dipped in silver nitrate in 1836, the daguerreotype revolution spread rapidly across the whole of Europe, including Spain, where it also had an immediate impact. Daguerreotypes aroused a deep fascination with the way their small silver plates seemed to capture and encapsulate the enigma of human identity.

The Captive Gaze immerses us in the origins of photography through 105 images from the collection of daguerreotypes of the Center for Image Research and Diffusion (CRDI) of Girona City Council, one of the most notable of its kind thanks to the variety and importance of its pieces.

The exhibition is rounded off with a selection of the instruments used for making daguerreotypes from the Cinema Museum of Girona, which helps to understand the visual culture of those times, as well as two videos that explain how to make a daguerreotype and the restoration process of a group of them for displaying at this exhibition.

The exhibition opens one of the new lines of programming that Fundación MAPFRE has started in Barcelona in collaboration with Catalan institutions that harbor a rich photographic heritage, which on this occasion has enabled us to put together the story of the early years in the history of photography from a technological and cultural perspective.

Captivity: The meaning of the term “captive” in the title suggests a double significance. On the one hand, in the words of the writer, critic and French-Bulgarian linguist Tzvetan Todorov, it refers to the intention of “capturing the moment and pinning down something fleeting”; while on the other it might refer to the fascination, or captivation, aroused by the appearance of the daguerreotype in the late nineteenth century. This object, the first that could be disseminated and commercialized in the history of photography, was considered to be a psychochemical ‘prodigy’; ‘the mirror of memory’ as it was commonly known at that time.

Silver salts: Following the work of Joseph-Nicéphore Niépce (d. 1833) on the sensitivity of light to silver salts, the daguerreotype was first revealed by Louis-Jacques-Mandé Daguerre, who in 1836 obtained the very first image on a plate dipped in silver nitrate: the first daguerreotype, which he continued to fine-tune through to its official presentation on 7 January 1839.

A cosmopolitan phenomenon: The almost total absence of daguerreotype production in Girona, at a time when the city was still very far off the industrial development it would experience years later, supports the idea that this photographic technique was initially a cosmopolitan phenomenon. This premise is one of the lines on which the construction of the CRDI’s collection focused, whose main objective is to publicize, protect, promote and disseminate Girona’s documentary heritage in the form of images, as well as to show the technological evolution of photography.

Multimedia vision: In addition to the two explanatory videos, the tour of the exhibition is rounded off with a project that started life as part of the research conducted by the CIFOG school (Faculty of Audiovisual and Multimedia Communication of Girona), which developed some photograms that give a 3D view of four of the daguerreotypes in the collection. In addition there is an interactive experience with which you can explore the workspace of a daguerreotypist of that time, and replicate the different steps required to create a daguerreotype.