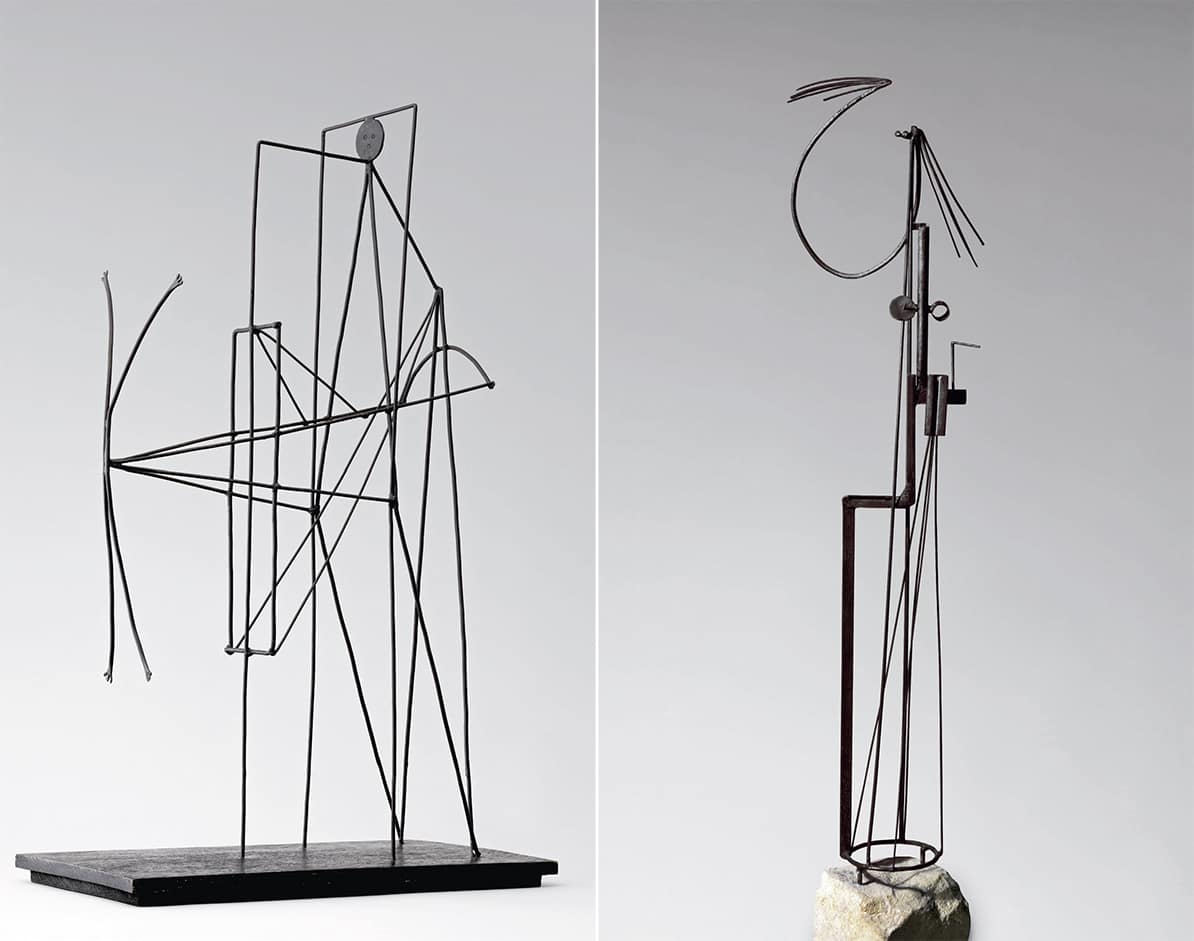 Traditionally, the joint work between Pablo Picasso and Julio González has been considered by art historiography as the moment at which iron sculpture was “invented” and, therefore, the introduction of abstraction into the realm of sculpture. However, and for the first time, the present exhibition shows how this fact, one of the fundamental milestones in the international art of the 20th century, was not an isolated one-off event, but the consequence of a process that, in the words of Tomàs Llorens, curator of the exhibition at the origin of this project, “responded to an impulse of transparency and dematerialization that shook up, in a variety of ways, the artistic creation of the late 1920s and early 1930s”.

Julio González, Pablo Picasso and the dematerialization of sculpture is the last great project of Tomàs Llorens, one of the most brilliant and iconic art historians of our country, who passed away on June 10, 2021. Curated together with his son Boye, this exhibition culminates a line of research to which the historian devoted a major part of his work for much of his career.

Exhibition organized by Fundación MAPFRE with the collaboration of the Musée national Picasso-Paris, the Spanish National Commission for the Commemoration of the 50th Anniversary of the Death of Spanish Artist Pablo Picasso, and the González Administration.

This show is part of the official programme of the Picasso Celebration 1973–2023, supported in Spain by Telefónica as corporate sponsor.

How to give form to nothingness? This is what Picasso asked himself when he was commissioned to create a monument to commemorate his friend Guillaume Apollinaire after his death in 1918. This question, to which the artist would not give a response until almost ten years later, was inspired by a passage from Le Poète assassiné [The Poet Assassinated], a more or less autobiographical novel by the writer in which the protagonist announced his own death. When the poet Croniamantal —who is none other than Apollinaire— dies, “The Bird of Benin” —who embodies Picasso— announces that he is going to erect a statue of him. “A statue of what?” asks Tristouse, the deceased’s girlfriend. “Of marble? Of bronze?” “No” answers The Bird of Benin, I have to sculpt a profound statue of nothing, like poetry, like glory…”.

Picasso, who was familiar with González’s work, knew that the latter had been researching metal sculpture as a natural evolution of his trade as a goldsmith, and it was undoubtedly this fact that, when he had to answer the question posed at the beginning of this epigraph, made him call his old friend to help him. The first thing Picasso had in mind was to make a cage, because, as Tomàs Llorens says in one of his texts about this episode, “Cages shape the air. They enclose it without enclosing it, because there is nothing freer than air in a cage.”

The collaboration between González and Picasso, friends since the days of modernist Barcelona, began in September 1928. The process of working together was drawn out over time and finally did not materialize, at least not as planned, due to continuing differences with the committee, which expected a traditional memorial. Despite this, it did bear fruit. González created a series of dematerialized sculptures on which he would work for the rest of his career and which would posthumously earn him the reputation as one of the fathers of abstract sculpture in iron, despite the fact that he himself stressed his detachment from this trend. Picasso, on the other hand, learned the possibilities of forge work and iron welding taught by Gonzalez, and created some of the most significant sculptures of the last century, such as Woman in the Garden.

Catalan Modernism: Catalan Modernism was the short-lived but intense movement that played a leading role in Catalan cultural history from 1880 to the first decade of the 20th century. Its importance was linked to that of two fundamental names, Antoni Gaudí and the first Pablo Picasso —up until his attachment to the Parisian avant-garde through cubism.

The main manifestation of Catalan modernism was in the field of architecture and the decorative arts, which, for the first time in Spain, began to be regarded as a discipline falling within the fine arts. This process was supported by the development of a Barcelona that began to undergo the transformations of the Industrial Revolution and become a cosmopolitan city open to the world. Artists and intellectuals enthusiastically embraced the experience of modern life in all its expressions, but subsequently, during the late modernist period, they rejected it. They became more interested in the life of the poor and destitute, in a style of painting that resulted in what is known today as “miserabilism”. In addition, artists such as Joaquim Mir, Joaquim Sunyer, Isidre Nonell and Pablo Picasso shifted their gaze to a certain primitivism and classicism, a trend that had in the figures of Puvis de Chavannes, Paul Gauguin and, above all, El Greco some of its greatest exponents. It was in this artistic climate of late modernist Barcelona that the foundations of the friendship between González and Picasso were laid, and it was also a context that marked the future of their respective creative paths.

Julio González, from goldsmith to sculptor: Goldsmithing and sculpting are intimately linked in Julio Gonzalez’s career. And it is no less true that the idea of reviving traditional crafts, practically lost since the Middle Ages, as was the case of goldsmithing, was an essential part of the Modernist agenda that the artist experienced during his youth. For years, he and his brother Joan worked in the workshop of their father, Concordio González, a craftsman specialized in iron forging and goldsmithing, a job that, in the case of González, was a substitute for his training in the school of fine arts. Today we know that some of the jewelry he made there was sent to international fairs, pieces inspired by plant and other natural forms, in line with Ruskin’s ideas. Three years after their father’s death, the two brothers closed the family business to settle in Paris and pursue a career as painters. However, goldsmithing or decorative commissions continued to be Julio Gonzalez’s main source of income throughout his life.

In 1913, he opened a store for the sale of jewelry and objets d’art at 136 Boulevard Raspail, and in his first shipments of works to the Parisian Salon des Indépendants and Salon d’Automne he registered as a “painter and goldsmith”. In 1918, he joined the Renault factory as a worker, where he learned the autogenous welding technique, which he would use in the new iron sculptures he would create years later. In 1929, he presented only iron sculptures at the Salon d’Automne, thereby demonstrating his definitive choice for this medium.

Dematerialization of sculpture: In the second half of the 1920s, in Paris, there was a general trend towards the dematerialization of sculpture volumes. Artists such as Jacques Lipchitz, Alberto Giacometti and Henri Laurens rejected the traditional concept of round sculpture and expressed their curiosity for transparency through the dissolution of volumes into different planes to create a play of light and shadow or incorporate emptiness into their compositions. The collaborative works of González and Picasso are part of this “zeitgeist”. A decade later, the Catalan artist carried this tendency to its peak with what he called “drawing in space”, a drawing that, consisting of metallic lines, materializes in the three-dimensionality of space.

April 8, 2023, marks the fiftieth anniversary of the death of Spanish artist Pablo Picasso and thus the year will represent a celebration of his work and his artistic legacy in France, Spain and internationally.

The French and Spanish governments wished to mark this transnational event through a bi-national commission, bringing together the cultural and diplomatic administrations of both countries.

The Picasso Celebration 1973-2023 revolves around some fifty exhibitions and events to be held at renowned cultural institutions in Europe and North America that, together, address a historiographical analysis of Picasso’s work. The commemoration, accompanied by official celebrations in France and Spain, will make it possible to take stock of the research and interpretations of the artist’s work, especially during an important international symposium in autumn 2023, which also coincides with the opening of the Center for Picasso Studies in Paris.

The Musée national Picasso-Paris and the Spanish National Commission for the commemoration of the 50th anniversary of the death of Pablo Picasso are pleased to support this exceptional program.

See the complete list of all Picasso Celebration exhibitions (70 KB)