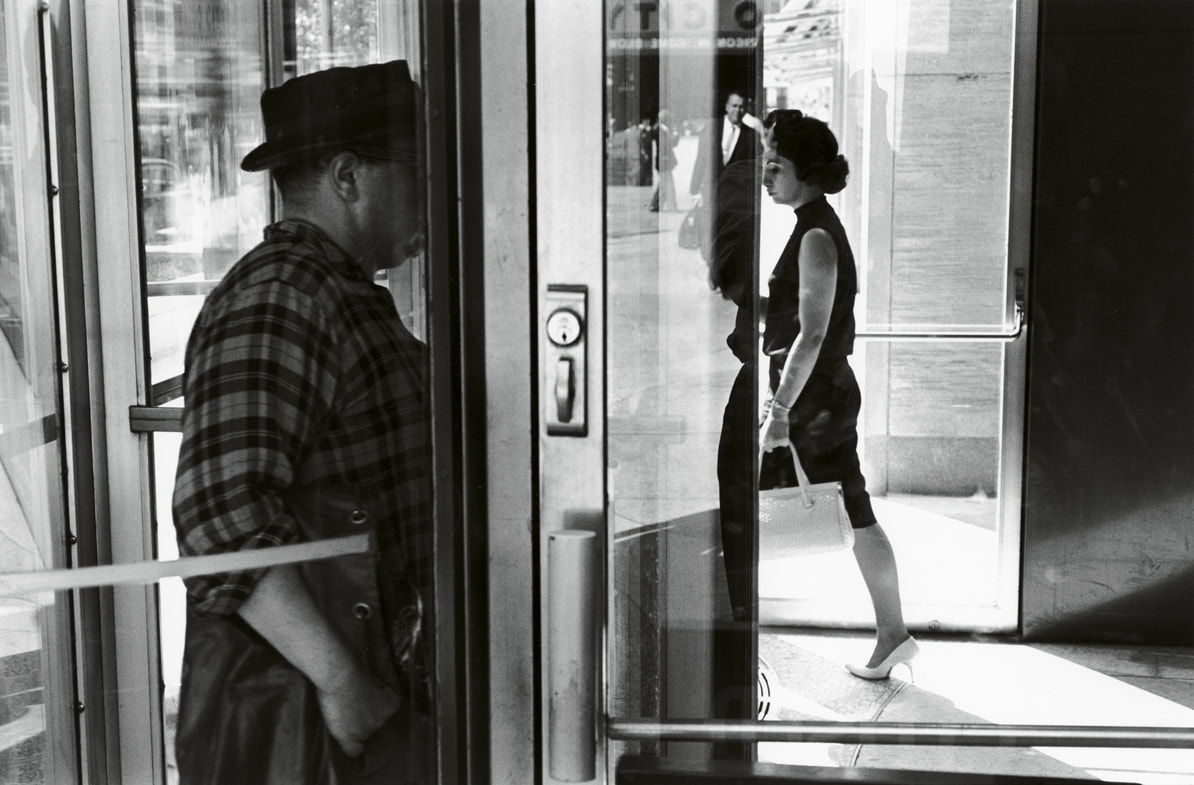 Over his career, Lee Friedlander has accomplished a far-reaching artistic output, recording what he himself called, in the 1960s, the “American social landscape”. The exhibition, which covers his entire body of work in chronological order, emphasizes some of his most significant projects such as The Little Screens, The American Monument, and America by Car, as well as a group of photographs taken in Spain during the 1960s, on display for the first time.

Lee Friedlander has been a photographer almost since he was a teenager and throughout his long career he has produced a wide range of work. In the sixties, after settling in New York and despite still being in an apprenticeship period, he became a mature artist.

As had happened with the Dadaists and at the same time as pop art, the photographer broke away from traditional means of representation and looked to popular culture for inspiration. To do this, he incorporated the mundane into his repertoire, creating confusing visual arguments and shaking the viewer with a sense of irony derived from juxtapositions of seemingly unconnected objects and ideas, in contrast with the seriousness of previous documentary photographers.

The exhibition has been organized chronologically, starting from the beginning of his career to his latest images, taken just a few years ago, featuring around 300 photographs of urban scenes, landscapes, portraits, self-portraits or natural forms. It also includes a selection of books of his most significant projects.

New Documents: In 1967 the New Documents exhibition was organized at the MoMA in New York, showcasing the work of Garry Winogrand, Diane Arbus and Lee Friedlander. It was from that moment that the latter’s career gained definitive momentum. In addition to showing the influence that Walker Evans and Robert Frank had exerted on the three artists, the exhibition revealed a new way of understanding photography that was much more approachable and highlighted the differences between this new generation of documentary artists and those who had preceded them. In the introductory text to the exhibition, its curator John Szarkowski wrote: “Most of those who were called documentary photographers a generation ago when the label was new made their pictures in the service of a social cause. It was their aim to show what was wrong with the worlds and to persuade their fellows to take action and make it right. In the past decade a new generation of photographers has directed the documentary approach toward more personal ends. Their aim has been not to reform life but to know it.”

American social landscape: To get to know that life and the environment around them, both Friedlander and Winogrand, following in the footsteps of Walker Evans and Robert Frank, decided to photograph the “American social landscape” through frequent road trips, in the purest On the Road style of Jack Kerouac. Over the course of six decades, Friedlander has portrayed everything that passed in front of his camera that could be of interest, recording the American landscape and society and translating mental images with his photography. This approach has allowed the artist to reflect on the world in order to understand it and thus encourage viewers to reflect with him.

The American Monument: In 1976, Friedlander published one of the projects for which he is most famous, The American Monument, with more than two hundred photographs taken, mainly between 1971 and 1975, of various monuments in different American cities. These images are linked to the tradition of documentary photography like no other of his series. An idea that started with Eugène Atget and his anonymous inventory project of the urban decay of Paris and that continued with Walker Evans, pioneer of that elaborate documentary vision, which turned documentary into a more lyrical and poetic image. In Friedlander, Evans’ idea is combined with Robert Frank’s more critical gaze, but “animated” by a more ironic air. What Friedlander produces are not documents, but photographs. The artist dignifies the monuments with these apparently simple images, but composes them like any other element: trees, water, leaves, landscape, are all presented with the same naturalness. In some of these photographs, the protagonist of the composition even appears half-hidden, in a subversion of the rules of the medium that is, as noted above, a constant in his work.

The Hasselblad camera: At the end of the 1990s, Friedlander decides to change his 35mm camera for a medium format one, a Hasselblad Supervise, with a 38mm Biogon lens and 6×6 film. Thanks to its square format and this lens developed by Zeiss, distortion is practically non-existent and the image is sharp and defined even in the corners, where light loss is also considerably reduced. Everything is there in front of us, with the same density and presence.

He made the decision to change cameras when trying to photograph the Sonoran desert and its vast landscapes; from then on, those photographs from the 1960s, with their abundant reflections and juxtaposed motifs, gave way, in the 2000s, to apparently more orderly images.

The catalog for the exhibition includes copies of all the works on display, as well as a feature essay by the curator of the project, Carlos Gollonet, Chief Curator of Photography at Fundación MAPFRE, and a text by Nicholas Nixon, one of the most renowned photographers on the international scene today. There is also a conversation between Maria Friedlander and Jeffrey Fraenkel, a gallery owner who collaborated with the photographer for many years.

The catalog is available in Spanish, Catalan and English, the latter co-published by Fundación MAPFRE and RM.

See all the Exhibitions of 2022
You may also like