The girl in white 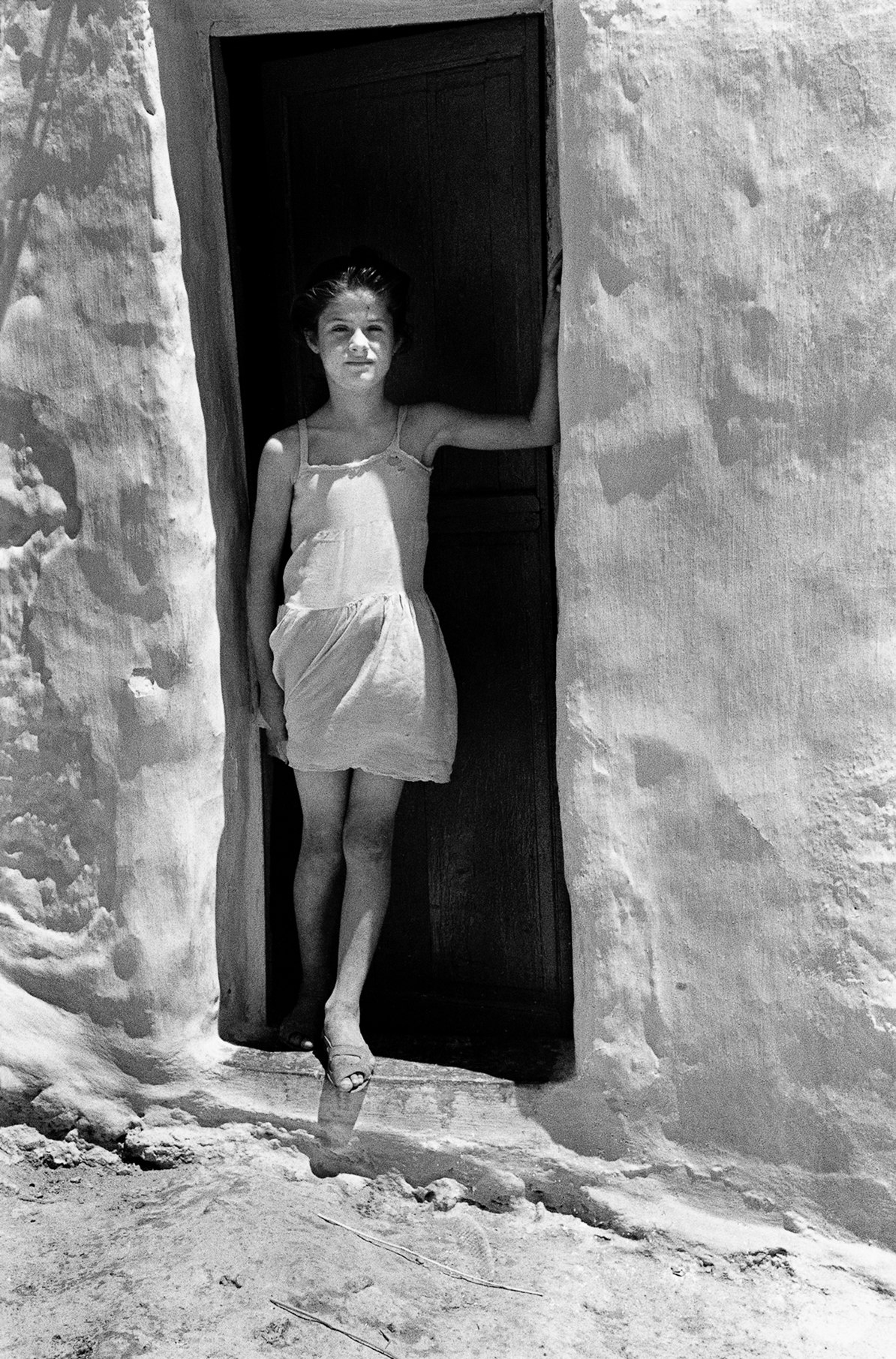 Home > Art and Culture > Culture in motion > The girl in white

This photograph has a crude beauty that is troubling for the poverty and misery it fails to hide; the liminal space shows us the silhouette of a figure between the closed darkness of the interior and the startling whitewashed brilliance of the outside where this girl leans, dressed in a threadbare undergarment; her expression reflects the gaze of someone old before their time, the right angle of her left arm leaning on the doorjamb, the self-consciousness in gathering up her skirt with her right hand, one foot wearing an espadrille placed forward and the other still in the darkness of the room behind, with her hair recently brushed and her face partially bathed in sunshine, she invites us to look at her, to be seen. Pérez Siquier managed to masterfully capture from some distance a picture that almost forces us to walk on by, as if we have been surprised by an apparition that does not belong to us yet at which we cannot stop looking.

A landmark in Pérez Siquier’s career was the project he developed on La Chanca, a fishing shanty town in Almería that was once a Muslim ghetto where, for a long period of time (1956-1965), the photographer was captivated by the dignity of its poverty-stricken inhabitants. A series of photos enshrined in an architecture of shacks and caves with sculptural properties and dazzling light, of harsh blacks and whites, a poetic space that is overwhelming in its beauty yet devastating in terms of its material deprivation in the grey backdrop that was Spain at that time.

Juan Goytisolo also wrote an eponymous novel about La Chanca in 1962, warning us that “inside the caves I glimpse the deformed figures of old men, women, children. Madness and tuberculosis have taken their toll on them and I get the impression that they hide away as we pass.”

In both cases, we are party to work that harshly denounces a situation of slavery, poverty and exploitation. We can sense this in the girl’s face, whose eyes, half-closed in the sun, could easily reflect, or at least it seems to me, the same painful subject matter as the photos that Diane Arbus used to take in the parks, the asylums and the streets. “A photograph is a secret about a secret,” she said, and this portrait by Pérez Siquier reflects that truth.

Along with José María Artero, Siquier created the legendary AFAL group (1956-1963) and its magazine which used to channel all the avantgarde photography of those years in Spain, including Ramón Masats, Ricard Terré, Gabriel Cualladó, and Oriol Maspons, among others. Although it was a very heterogeneous group, its common thread was the socialist and humanist way they expressed themselves.

Pérez Siquier was thus a committed, humanist and neorealist photographer who invites us in all his works on La Chanca on a humble and eye-opening journey in the wake of his historic exhibition The Family of Man which, in 1955 documented the harsh conditions of the post-war years in Spain, showing how values and principles unite all human beings equally; an exhibition curated by Edward Steichen and featuring 270 photographs which were initially shown at the MoMA in New York before touring the world. Steichen himself, in 1959, invited some of the photographers from AFAL to take part in the exhibition Masterworks of Photography from its Beginnings to the Present, another important group exhibition at the MoMA which was a real accolade to these magnificent photographers.

Carmela García is a photographer. She won the award for the best publication from PhotoEspaña in 2003 for Mujeres, amor y mentiras (Women, Love and Lies). She also won the Community of Madrid Culture Award in the category of Photography in 2018.