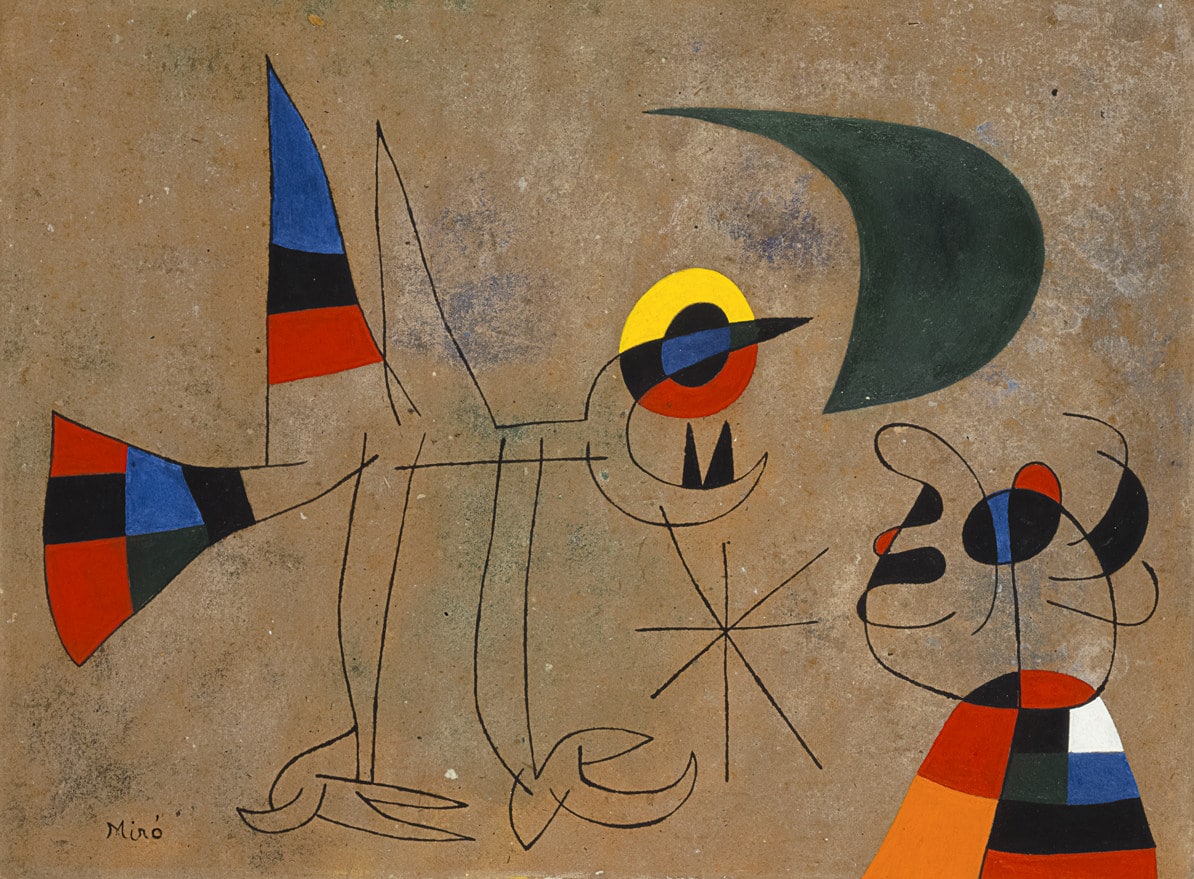 Entering the artistic universe of Miró means discovering the embodiment of pure color, identifying the logic of symbols and evaluating the difficult harmony between the constant and the ethereal. The Catalan artist, who exerted a powerful influence on key American painters of the mid-20th century, was a creator, magician and genius of contemporary.

With this exhibition we seek to dig deeper into Miró’s soul through 65 works which include some of the symbols most characteristic of his work: stars, suns, moons, birds and feminine forms. The elements of his works are strategically placed on the canvas and speak to the importance of meditation in art and the concept of controlled spontaneity. Furthermore, five of Calder’s structures reveal the friendship and professional relationship between the two artists.

Important: We inform you that a significant number of works in the Espacio Miró have been loaned temporarily, therefore the collection is not shown in its entirety. Sorry for the inconvenience.

As part of health protection measures, Educational Activities for schools are temporarily suspended.

As part of health protection measures, Educational Activities for families are temporarily suspended.

Throughout more than six decades of continuous work and already acclaimed as one of the 20th century’s masters of art, Miró always stayed true to his innovative spirit and refused to rest on his laurels. He saw his work as the perfect tool for raging against conservatism and achieving social change. His work was informed by the concept that art should be for the use and enjoyment of the people, resulting in the production of murals, ceramics and sculptures for public spaces. The artist’s work exudes a variety of influences, such as primitive schematism and popular tradition, but also from other fields as disparate as Asian calligraphy and urban graffiti.

Miró hypnotizes and seduces us with a world that is fantastic, personal and authentic, filled with vibrant black patches and inhabited by immense primary colors. Miró was able to express eloquence and feeling through his work thanks to his ability to represent the tangible and material world through messages filled with poetry.

The opening of the Espacio Miró is especially satisfying for Fundación MAPFRE in that it houses more than sixty pieces of loaned work on permanent display at our exhibition halls on the Paseo de Recoletos, 23.

Visual signs.In the mid-1920s, Miró came up with an innovative plastic art vocabulary related to the surrealist avant-garde, which he continued to develop throughout his life. The artist created a dreamlike universe of unreal figures, evoked by intense pigments, heavy black contours and the skillful use of blank spaces.

Decisive in 20th century American painting. In 1941the first retrospective of the artist was held at the New York Museum of Modern Art to great critical acclaim. This event consolidated him as a master of modern art and his work began to influence a generation of artists of the stature of Rothko, Pollock, Gorky and Motherwell.

Assassinate painting.This is his famous message pronounced in 1927. His speech highlighted the need to break with traditional pictorial techniques. This concept was transferred to his artistic compositions by using new materials: fabric, cork, metal, fibers, bark, etc. Many of these elements were picked up by the artist on his long walks through the countryside.

Alexander Calder. Just like Miró, the American artist was interested in abstraction and they worked together. One of their most commendable achievements was to draw in three-dimensions with moving elements that appeared to dance in the air. In 1936, the New York World Telegram published: Calder’s mobiles are like living abstractions of Miró.

Birds and much more in a Miró landscape

Come and feel the Espacio Miró