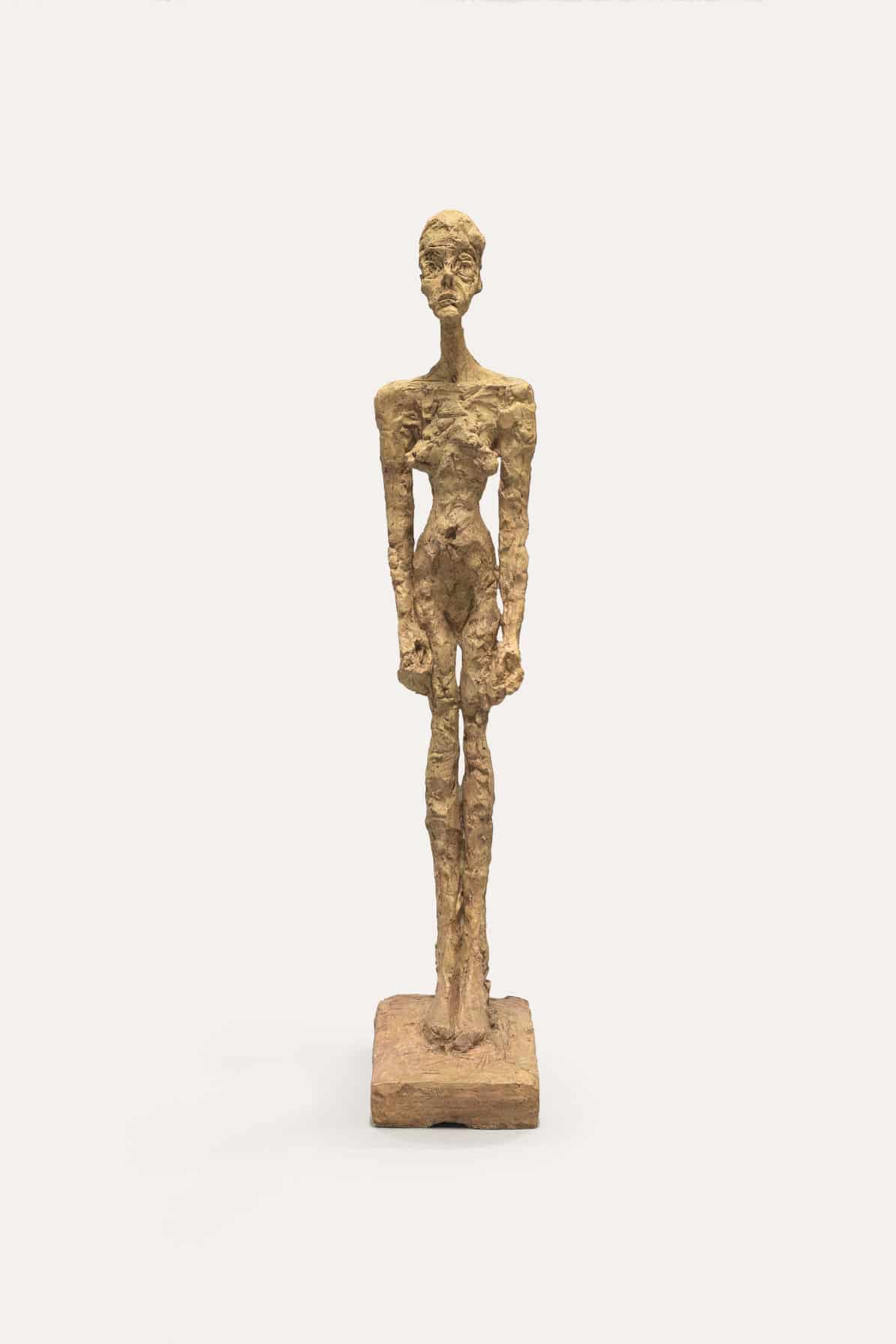 Figure debout, Standing Woman, 1958), was made after the first major exhibition on Giacometti in the Swiss pavilion at the Venice Contemporary Art Biennale in 1956. For the exhibition he had created the Women of Venice,  eight sculptures of woman standing on pedestals. It is quite possible that all of them were versions of the same woman – the goddess, ‘the other’ for Giacometti – the power of the sculpture enhanced by its representation as a group.

The figure in Figure debout [Standing Woman] is an evolution of the Women of Venice in which we can see the difference in specific details. The figures of women he produced earlier were smaller in size and stood on large pedestals, giving the illusion that they were lost in the distance, in addition to which Giacometti did not complete them with clear-cut gestures or forms as, in his opinion, they were figures that could only be represented in full length, from a distance, as if they were going to disappear or fade away. In the Women of Venice, still small and without any specific gestures, yet already more realistic in their proportions and standing on smaller pedestals, they started to differentiate themselves from one other and acquire a certain personality.

In Figure debout [Standing Woman, 1958], you can already distinguish many features and specific forms such as the upturned nose and closed mouth, the rounded chin and the lines on the forehead, reminiscent of his wife Annette Arm; you can also distinguish the proportions of her slim, slender body, her almost lifelike breasts and her angular collarbone and hips, all in a much more realistic approach.

By now, Giacometti had reached another point in his career. After many years of sculpting the human figure in small format, reflecting what his eyes could see in the far distance, he took the bold step of accepting a commission from the Chase Manhattan Bank to make a life-sized copy of his sculpture Three Men Walking (1948) which, although never eventually completed, helped him to think about the proposition and made him realize that if he created them life-sized it would not be necessary to put them on a pedestal; he could place them on ground level where they could mingle with people. This decision helped him to overcome the need to see the human figure as if it were in the distance, devoid of detail, and to consider a new human figure full of details with the possibility of being viewed from every perspective.

From a very young age, Giacometti was obsessed with the idea of bringing his works to life; it was at the age of 12, when reading articles on Egyptian sculptures, and in particular one on Akenatón and Nefertiti which portrayed the couple playing with their children in a family scene, that he discovered the Egyptian concept of the sculptor as someone who maintains and perpetuates the life of the person or people portrayed.

Representing life as he saw it would become his goal, though he himself would recognize this idea as an ‘impossible’ project, since his perception of the world would be in constant motion, which led him, among other things, to repeat every sketch, every portrait, and every figure endless times.

Figure debout [Standing Woman, 1958] would lead on to a new way of perceiving his limitations. It was in this figure of a standing woman, made after years of studying how to draw the human head and the expression of the soul and feelings, that he would start portraying human gestures and the depth of their gaze and soul. This work, which can be viewed from any perspective, would be one of the first in Giacometti’s new approach to portraying figures, which he would continue to work on and develop in greater depth, along with his drawings and paintings, until the end of his life. Giacometti defined himself as a realistic artist, though Sartre and other contemporaries saw him as an existentialist artist because he created works that revealed the anxieties and alienation of twentieth century life.

The moment at which he made this piece would mark a turning point in the artist’s growth; a major step forward, since it went beyond the human being in his environment, dependent upon the eye of the beholder, to show an independent human who confronts and challenges the viewer, forcing him to turn his gaze inwards. On this point it is worth noting the nature of a quiescent feminine universe which inspired a symbolic creativity that would counterbalance his more dynamic masculine figures; together, in my opinion, forming the two parts of the self.