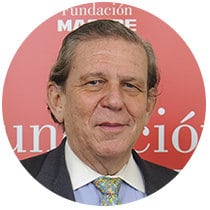 Education:
Degree in Law from the Universidad Complutense de Madrid.
Sworn English and French interpreter, appointed by the Ministry of Foreign Affairs of Spain.

Previous positions:
Partner of the law practice ELZABURU (from 1983 to 2016).